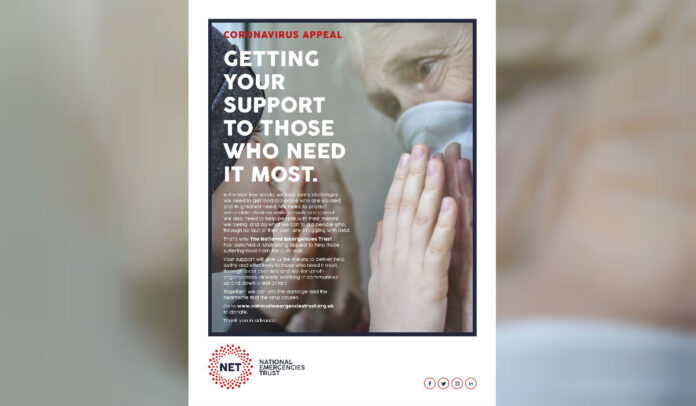 The National Emergencies Trust has launched its first ever fundraising campaign set to coincide with this Friday’s May Day celebrations.

The Trust created the campaign with support from krow London.

NET is an independent charity which collaborates with other charities and distribution partners to ensure that financial support is delivered to those who need it most.

Krow has worked on a pro bono project with the charity; and has created a press ad for Bloomberg’s Business Week in both EMEA and APAC.

The agency also worked with the Trust on a radio ad (below). This will air on, or shortly before, May Day, on Friday 8 May. It’s a 30-second ad in which a voiceover stresses that, in this time of crisis, if you can answer the call to limit damage and heartache, please do so.

A young voice is heard answering an older, frail voice, which calls out: ‘Mayday’.

Similarly, the press ad shows an older woman in a facemask, with her hand pressed up against a windowpane, as a younger friend or relative tries to blow a kiss, painfully separated by a physical barrier.

“The charity started from scratch last November and is now helping those who find themselves in the midst of this unprecedented crisis and suffering acutely.

“What the NET offers is completely new. And at this time it’s more important than ever that we help get support to those who need it most.”

The National Emergencies Trust launched at the end of 2019; to serve as a single point of appeal and fund distribution for future national emergencies.

The awful tragedy of Grenfell and the various terrorist attacks in 2017 in London and Manchester caused many in the charitable sector to think about how to respond to such emergencies most effectively.

The National Emergencies Trust was created as a result of those discussions.