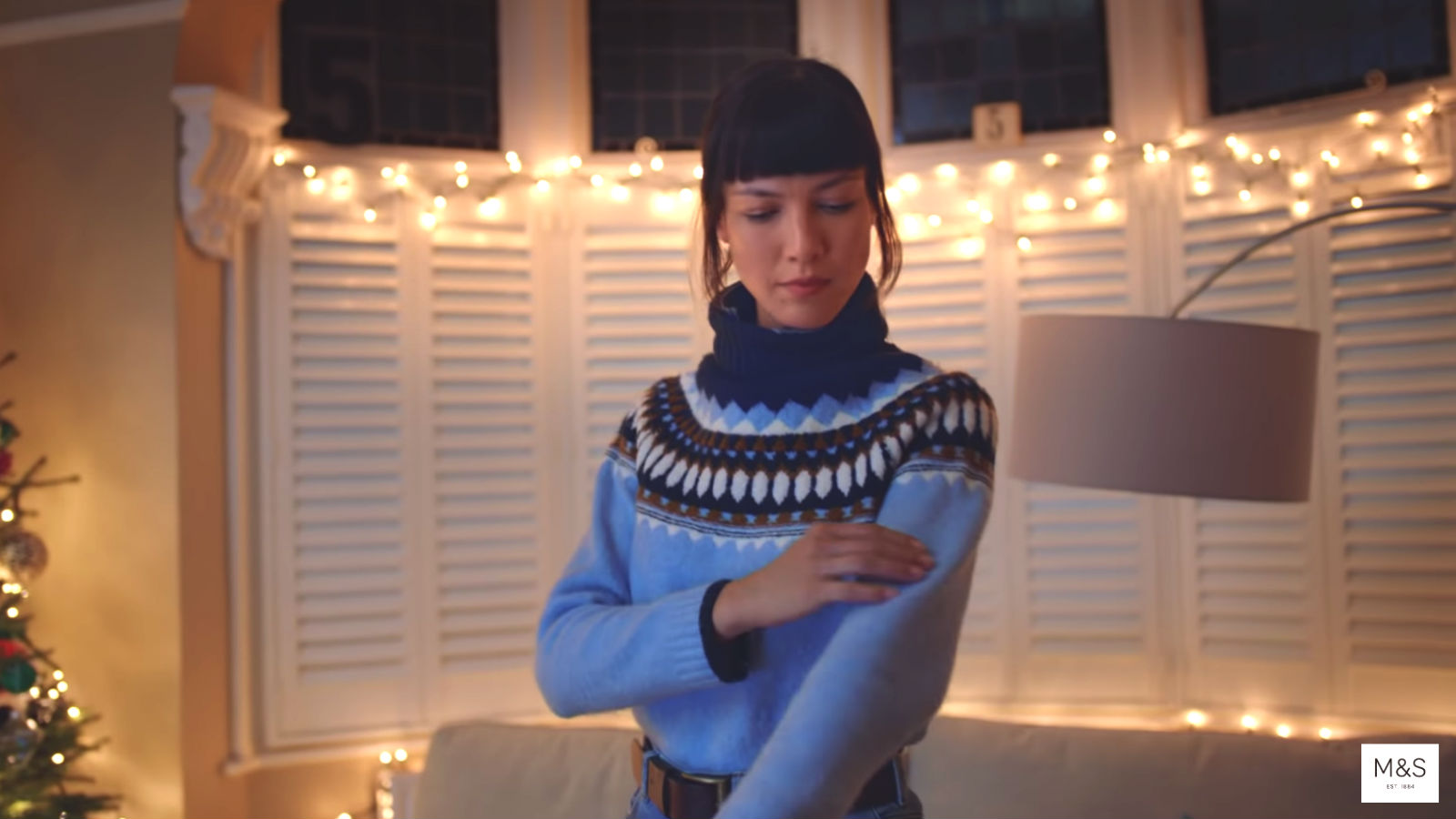 The woolly jumper is making a comeback this year as high street brand Marks & Spencer puts it centre stage of its Christmas campaign.

The high street favourite’s “joyful and jumper-filled Christmas advert” has been set to the equally jumpy iconic House of Pain track “Jump Around”.

Supporting M&S’s powerhouse category of knitwear, in 60 seconds the advert shows off 50 different jumpers from the nation’s biggest knitwear retailer – from the best value £19.50 knits, to beautiful cashmere for gifting this Christmas.

M&S expects to sell over five million jumpers this festive season across Womenswear, Menswear and Kidswear and the “Go Jumpers” campaign confidently shares the very best with the nation.

The ad premise is simple, M&S’s festive knitwear sparks “jumping around” across the UK – from friends in the local pub, to school kids at the bus stop, to a family chilling on the sofa.

Starring a diverse bunch, the office scene even sees one of M&S’s own colleagues “jumping around” in a festive jumper.

Monique, the Café Manager at M&S’s Marble Arch store who’s been dancing since the age of three attended an M&S colleague casting and was selected to appear in the ad.

The advert reflects that M&S is changing to become more relevant, more often to busy families across the UK – but this Christmas it’s going to do that by having some fun.

The “Go Jumpers” advert is just the beginning for the exciting Christmas campaign which will be executed across multiple platforms, with more content created for an M&S campaign than ever before – both in-house, by social influencers and by customers who will be encouraged to share their attempts at dancing the shoulder roll as they #gojumpers in their M&S festive knitwear.

Digital channels are at the heart of the campaign as M&S continues to drive 1/3 of its Clothing & Home sales online.

On social media M&S will make over 150 million impressions – an increase on last year that’s critical as the platforms have grown as selling channels – M&S revenue from social is already up 200% versus last year, alongside this M&S’s following has grown to 1.3million customers on Instagram.

Emails will be used to reach some of M&S’s most loyal customers – with 6 million receiving campaign emails each week.

Alongside this “Go Jumpers” imagery will dominate billboards across the UK with out of home marketing becoming more important as busy family customers increasingly shop on the go – 70% of searches for M&S products on Google are already via mobile.

“We’re backing with confidence our biggest commercial category for Christmas and importantly having some fun with our customers and colleagues.

“We can’t wait to see the nation Go Jumpers for Christmas.”

The “Go Jumpers” campaign follows on from M&S’s recent activity designed to broaden the retailer’s family appeal – including its collaboration with Disney’s Frozen 2 and the relaunch of sub-brand per una which has gone from “too frilly” to “stylishly feminine”.

M&S is also working to improve the shopping experience for busy families – yesterday saw the launch of Frozen 2 selfie station in its kidswear sections and last month it launched Christmas gift shops earlier than ever before responding to customer shopping habits.