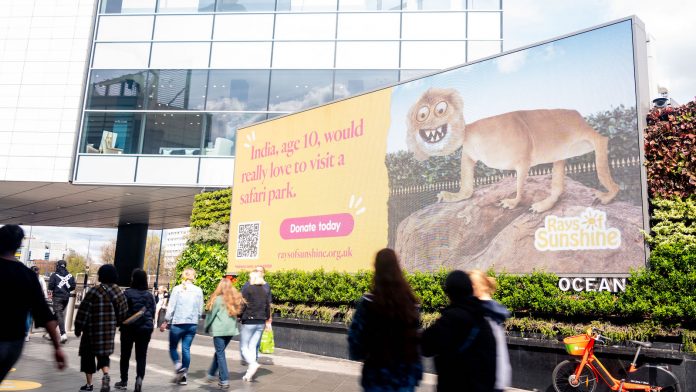 The hopes, dreams and wishes of seriously ill children are brought to life on one of Ocean Outdoor’s biggest full motion screens in a magical campaign created by MediaCom Creative Systems for the charity Rays of Sunshine.

This unusual idea turns a glorious collection of children’s drawings into real life renders, accompanied by the simple question – How will you make our children’s wishes come true?

‘Making Children’s Wishes Real’ was a winner in Ocean’s annual digital creative competition which seeks and celebrates bold new concepts in digital out of home advertising.

The campaign won first prize in the charity category.

Passers-by are encouraged to stop and look by standing on large vinyl footprints, with children’s voices coming from the poster asking them to pay attention to the screen.

As participants gaze at illustrations on the digital billboard, LookOut technology triggers an interactive experience, turning them into real life renders of the things the children have drawn, each execution revealing the wish of the featured young artist.

A QR code then takes people to the charity’s website where a donation can be made.

All of the images created for the charity are also appearing on the Instagram account Things I Have Drawn, run by Tom Curtis, executive creative director at MediaCom, as well as on Ocean screens in nine other cities over a three day period from 14 April.

“When I started Things I Have Drawn, it was fun way to get my two boys to draw, but more recently it’s become something much bigger, with parents sending in their kids’ pictures from all over the world”, Curtis said.

“Working with Rays of Sunshine feels like such a natural fit and I’m delighted to have been able to bring to life the drawings of these wonderful children using the cool LookOut tech on the Eat Street screen.”

Ocean’s Head of Marketing and Events, Helen Haines said: “This campaign is highly creative, fun and has great talkability. It is the Art of Outdoor at its best and perfectly demonstrates the interplay between digital out of home and social media. All for such an important cause.”

Dr Michele Afif, chief executive of Rays of Sunshine, commented: “Rays of Sunshine is honoured to have the opportunity to spotlight the creativity and imagination of the children we support through the ‘Making Children’s Wishes Real’ campaign.

“Rays of Sunshine grants wishes to seriously ill children so the ‘Making Children’s Wishes Real’ campaign reflects what we do perfectly.

“The children who created the artwork are excited to see their drawings come to life and we hope that people will take the opportunity to enjoy the campaign and to learn about the work that we do at Rays of Sunshine to create lasting memories for children and their families.”