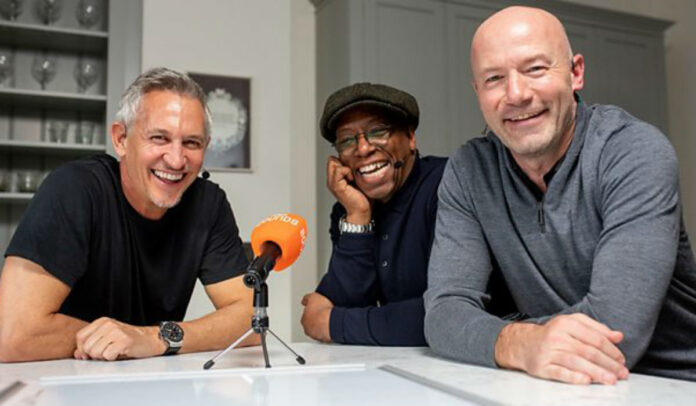 Match Of The Day: Top 10 will only be available on BBC Sounds.

Match Of The Day stuff

Taking themselves out of the studio, the series will be recorded in Gary’s kitchen and will see the guys getting into deep discussion to produce a top 10 on a variety of topics.

These range from Premier League captains to modern day goalkeepers, with Spanish midfielders of the 21st century thrown in between!

The top 10 model uses the much debated MOTD television running order as inspiration. Fans will undoubtedly have their own thought on who should make the list.

The three former England internationals have won countless awards, trophies and league titles between them.

Their experiences of players they have played with and against, plus the hours of football watched over the years will really play a part when pulling their ultimate lists together.

On Match Of The Day: Top 10, Lineker said: “Pulling a top 10 together seems an easy task but when you think back over the years we soon found out it was quite a challenge and one that sparked off many a debate.

“There’s so many amazing talking points in football, past and present, so it’s a pleasure to have Alan and Ian round my place to discuss these for the podcast – I might even provide lunch if we can agree on a few things!”

Shearer added: “There’s potentially going to be former teammates in the mix so there’s some big decisions to be made between the three of us.

“We’ve played with and watched some of the best over the years so I’m hoping all of this experience comes across. If not, blame Gary and Ian if you disagree with the top 10!”

On the new podcast, Wright said: “All three of us have so much fun in the studio so to give us our own podcast on BBC Sounds is a great move for Match Of The Day.

“I’m excited to get in there and make some tough decisions with the guys.

“We know not everyone is going to agree with our final top 10 lists but we want the podcast to create a wider conversation and buzz, so get on the socials and tell us what you think…

“Also, Gary has been promising for ages to have Alan and I over for lunch, so this podcast means it’s finally going to happen!”

The first episode of Match Of The Day: Top 10 is available from March 18 only on BBC Sounds, with a new episode dropping every Wednesday thereafter for 11 weeks.

UEFA postpones EURO 2020 by 12 months due to coronavirus