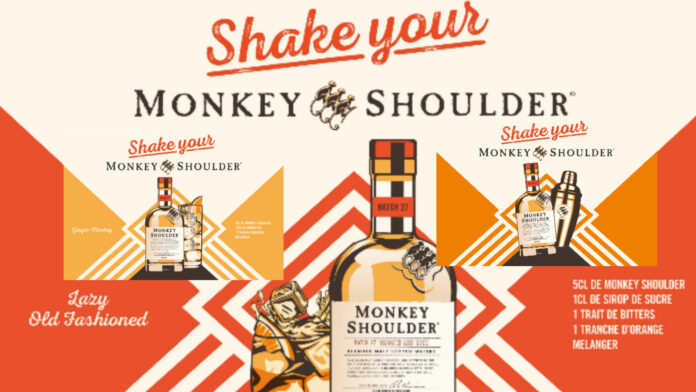 The campaign, which aims to recruit new drinkers, positions Monkey Shoulder as 100% malt whisky made for mixing and features a bold and distinctive identity that reflects the playful attitude of the brand.

It launches this month in France with OOH advertising in key cities including Paris, Toulouse, Marseilles, Bordeaux and Lille.

Further iterations and campaigns featuring the new visual identity are expected to roll out in other markets throughout 2020.

Most people might recognise his name from the artist’s 1989 “Andre the Giant has a Posse” sticker phenomenon or his iconic 2008 Obama “Hope” portrait, but early in his career he worked as a graphic designer and then founded SNO with his wife Amanda in 2003 as an extension of his style of innovative graphics and grassroots marketing merged within the world of advertising and brand identification.

London-based agency Space commissioned Studio Number One and collaborated with them on the development of the new identity. The creative, which features bold lines, graphics and colours, emulates screen-printed art with a playful Monkey Shoulder twist through illustrations, splashes and type providing an extensive and flexible range of communication assets for the brand.

This bold new look has started to be integrated across Monkey Shoulder social channels with a series of animated “how to” films, also created by Space, which promote these signature cocktails.

UK-based design agency, Here Design, has also worked closely with Space and Studio Number One to expand and evolve the new visual identity producing a suite of backgrounds, wallpapers and illustrations for all below-the-line assets across on and off trade channels currently being rolled out globally.

“Monkey Shoulder goes beyond the traditional conventions of scotch whisky, standing up for something authentically different and more democratic”, said Gregor McAlinden, Creative Director at Space.

“We were drawn to the work of Studio Number One and inspired by Shepard Fairey who have a history of design which challenges the status quo. This was a perfect creative collaboration amongst all parties and we’re immensely proud of the results.”

Victoria Yarnish, Vice President at Studio Number One, added: “It’s always a dream to work with clients that allow our team of graphic designers the creative freedom to take their branding to the next level.

“It was exciting to be able to reinterpret Monkey Shoulder’s bold brand personality visually with SNO’s new graphic illustrations and work with Space and Here Design to see them come to life.”

Since its launch 15 years ago, Monkey Shoulder has been on an impressive growth journey.