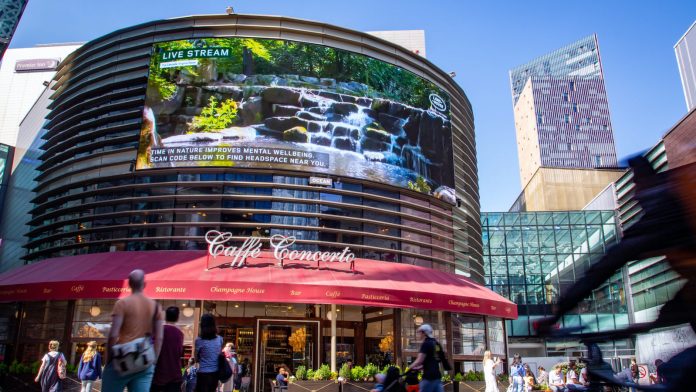 Research from Exeter University suggests that 40% of the working population fail to spend the recommended two hours minimum a week in nature to support their mental health.

The digital screens broadcast live scenes from nature, creating windows into green spaces that are closer than you think.

Ocean’s screens were purposefully placed at both Westfield retail and leisure centres in London – high density, urban locations, providing passers-by with a sensory experience to help them escape the city for a few moments.

To make the experience truly immersive, a directional sound shower played the calming natural sounds of a running stream, whilst a QR code directed the public to an interactive map showing where they could find the actual stream or other green spaces near them.

The campaign was supported by social, driving people to an interactive map.

Ocean’s Head of Marketing and Events, Helen Haines, said: “Our competition judges liked the insight and the tie into mental wellbeing.

“This campaign encourages local engagement but in a way that isn’t overtly selling. It’s a simple, effective concept with an important message.”

Lead creatives at Spark44 | Accenture Song Andrew Edelston and Pip Smith said: “For us, there’s always been a natural connection between Land Rover and the great outdoors.

“When we found the research linking time spent in nature with mental health, we saw a relevant space for Land Rover to help promote.”