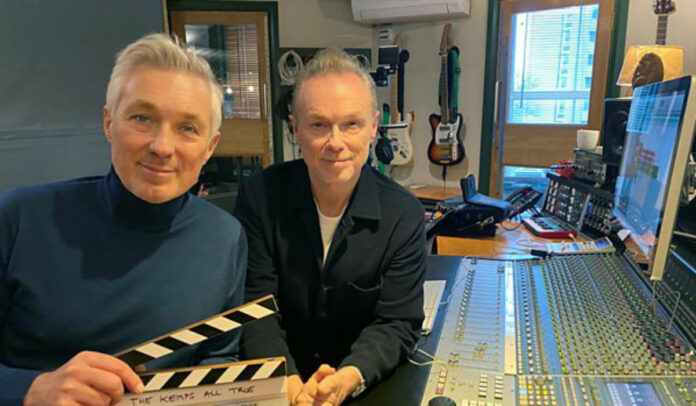 Spandau Ballet band-members Gary and Martin Kemp are to star in a new one-off spoof documentary.

The musical brothers will be playing themselves recording a new album.

Made by BBC Studios, The Kemps: All True will see Rhys Thomas OBE interview the pair about their lives and careers following Spandau Ballet’s 40th anniversary celebrations in December.

As part of Spandau Ballet, the pair have sold more than 25 million albums with 23 hit singles worldwide. In 2011 they received a BMI award after hit single True became one of the most played songs in US history.

As well as looking back at their musical history, The Kemps: All True follows the Kemps other passions. They include Martin’s attempts to launch a new film franchise and Gary’s plans for a new Vegan meat-substitute, Wonge.

Return to the limelight

“After being known as Roman Kemp’s dad for a few months, I’m really happy to be getting back in the limelight and being known for being that one from Spandau Ballet who hit someone over the head with an ashtray in EastEnders; as well as spending some time with my brothers, Gary and Ross”, Martin Kemp said.

Gary Kemp added: “I’m thrilled the BBC is making this probing documentary into the lives of my brother and me. And it’s great to be in the delicate yet blood-stained hands of the wonderful Rhys Thomas.

“Anyone who knows Rhys’s work can expect a little more probing than is usual. Our lawyers await.”

Shane Allen, Controller of BBC Comedy said: “I had to look up the word hagiography in relation to this… as it’s the complete opposite of that.

“Fair play to Gary and Martin for being good sports and going along with the screwball comedy brain of Rhys Thomas.”

“After 40 years, the Kemp brothers are clearly indestructible and we’re delighted we can assist them in their attempts to go for ‘Gold’ again. I for one wish them the best of luck!”

The Kemps: All True is a BBC Studios production for BBC Four.

Rhys Thomas will direct and produce and the BBC Commissioning Editor is Alex Moody.

Transmission details will be confirmed in due course.