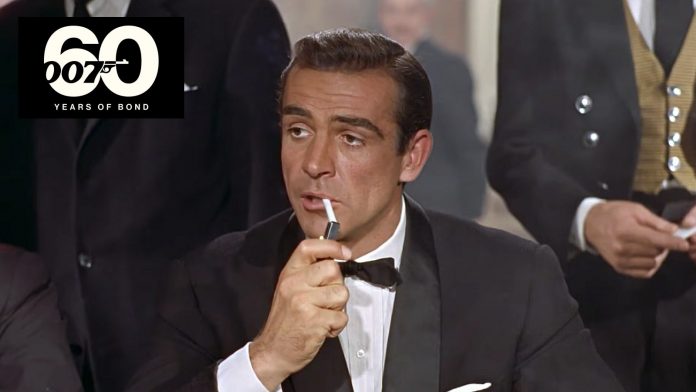 The BFI will celebrate the 60th anniversary of James Bond with a series of exciting events and screenings as part of its newly integrated programme across BFI Southbank and BFI IMAX, from 30 September – 2 October.

This special James Bond at 60 weekender features an ‘in conversation’ event with Producers and new BFI Fellows Michael G. Wilson and Barbara Broccoli; a behind the scenes look at the stunts and SFX work across the franchise with long term Bond special effects supervisor Chris Corbould; a preview of The Sound of 007, a new documentary celebrating the history of Bond music, from the iconic theme to Billie Eilish’s Academy Award-winning song for No Time To Die.

Plus anniversary screenings of classic Bond titles at BFI Southbank, a BFI IMAX triple-bill of Daniel Craig’s most recent adventures as 007 on the UK’s biggest screen, and a chance to see some of the most famous 007 vehicles on display outside BFI Southbank.

Michael G. Wilson and Barbara Broccoli have overseen the Bond franchise for nearly 30 years, producing nine of the 25 Bond films.

The pair recently received BFI Fellowships, the highest honour bestowed by the BFI, in recognition of their extraordinary achievements and enormous contribution to cinema.

As we celebrate 60 years of Bond on the big screen the BFI will welcome its new Fellows onstage at BFI Southbank for Michael G. Wilson and Barbara Broccoli in Conversation: 60 Years of James Bond (Friday 30 September).

This talk will discuss their careers and journey with Bond featuring clips from their films. A joint ticket is available for this event with the 60th anniversary screening of Dr. No.

Throughout the film series, the producers have set the global standard for the best stunt work and SFX. James Bond Behind the Scenes: Stunts and SFX (Saturday 1 October) is a chance to meet some of the team, including special effects supervisor Chris Corbould, who has worked on the franchise since 1977’s The Spy Who Loved Me.

In this special anniversary event Chris Corbould and other guests will talk about their craft, illustrated with film clips.

Cinematic history was made with Sean Connery’s suave introduction as 007 in the release of Dr. No in 1962. BFI will screen a number of classic Bond titles to mark their special big screen anniversaries.

Dr. No 60th Anniversary screening (Friday 30 September,) will take viewers back to the moment they met Bond for the first time on screen.

Directed by Terence Young and co-starring Ursula Andress, and Joseph Wiseman, Dr. No sees Connery’s 007 sent to Jamaica to investigate the disappearance of a fellow British operative, where he encounters the dastardly villain Dr. No.

Many favourite Bond components began here, including the 007 music theme.

Mat Whitecross’s new documentary, The Sound of 007 (Saturday 1 October), reveals the history behind the music of Bond, from the genesis of 1962’s Dr. No iconic theme, through to Billie Eilish’s Academy Award-winning song for 2021’s No Time To Die.

Director Matt Whitecross will take part in a Q&A with lyricist Don Black who wrote the theme songs for Thunderball, Diamonds Are Forever, The Man With The Golden Gun, Tomorrow Never Dies and The World is Not Enough) and Composer David Arnold who wrote the scores for Tomorrow Never Dies, The World Is Not Enough, Die Another Day, Casino Royale and Quantum of Solace. The Sound of 007 is produced by John Battsek for Ventureland.

The Spy Who Loved Me

Cited by Roger Moore as his favourite 007 film, The Spy Who Loved Me remains a firm fan favourite 45 years on.

The Spy Who Loved Me 45th Anniversary screening (Saturday 1 October) reintroduces viewers to one of the most iconic Bond villains of the series, Jaws, played by 7ft Richard Kiel. Jaws is the steel jawed henchman, and later ally who made his return in Moonraker in 1979.

The Spy Who Loved Me sees Roger Moore’s Bond team up with Russian KGB agent Anya Amasova (Barbara Bach) in an attempt to prevent global destruction at the hands of a megalomaniacal businessman hell-bent on creating a new world under the ocean.

The Living Daylights 35th Anniversary screening (Saturday 1 October) written by Michael G. Wilson and Richard Maibaum, and directed by John Glen, follows Dalton’s 007 as he assists a Russian general trying to defect to the West.

Soon Bond becomes embroiled in a cross-European thrill-ride with glamorous cellist Kara Milovy (Maryam d’Abo) by his side.

The special weekend comes to a close with a triple-bill of Daniel Craig’s most recent 007 films at the BFI IMAX. Skyfall director Sam Mendes’ modern Bond classic took over a billion dollars at the box office and universal acclaim.

When his mission backfires, M (Judi Dench) is forced to take responsibility for the mission’s failure as she and Bond face a ruthless adversary, someone close enough to M16 to inflict maximum damage.

Sam Mendes returned to direct Spectre (Sunday 2 October), featuring one of the most extraordinary opening sequences in the Bond series, made even more impressive on the IMAX screen.

007 is suspended by M (Ralph Fiennes) after pursuing a rogue mission in Mexico and soon discovers that the 00 department is in danger of being shut down.

Spectre co-stars the cream of contemporary European acting talent, Léa Seydoux, Monica Belluci and Christoph Waltz, who introduces us to a new incarnation of SPECTRE No1, Ernst Blofeld.

The final outing for Daniel Craig as 007, No Time to Die (Sunday 2 October), in IMAX digital 3D, was instrumental in bringing global audiences back to the cinema and became the highest grossing film of the year in the UK.

Directed by Cary Joji Fukunaga, No Time To Die introduces Bond as a retired MI6 agent living in Jamaica who finds himself in demand again when asked to help rescue a scientist kidnapped by his old foes at SPECTRE.

The world has changed since Bond last worked in the field and as the mission becomes more treacherous, it’s clear that Bond has more than met his match in Rami Malek’s Safin.

Be prepared to be shaken and stirred at BFI Southbank and BFI IMAX for this big screen celebration of a British cinematic icon.