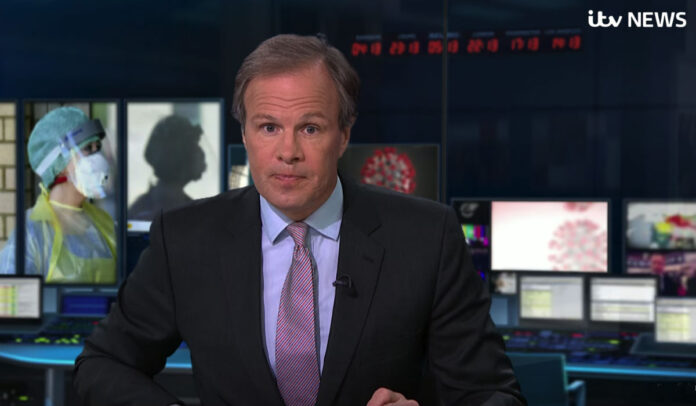 If ITV‘s viewing figures are anything to go by, then most of us are getting the message and staying home amid the coronavirus outbreak.

ITV Lunchtime News had its biggest audience since New Year’s Day 2014, doubling its ratings year on year, while more than four million tuned into the ITV Evening Regional News, demonstrating the countrywide appetite for trusted news at both national and regional level.

There were sharp rises of up to almost 20% for ITV Evening National News and ITV News at Ten.

Peston had its biggest ever audience on a Wednesday night with 1m viewers and a 13% share.

Good Morning Britain was watched by its seventh biggest audience ever.

More young people are also tuning in to ITV’s News and Daytime programmes with viewing among 16-34s so far this week in daytime (Monday-Wednesday 06:00-17:59) rising by more than a quarter [26%] compared with the year to date average.

16-34 viewing to the ITV Lunchtime news has more than doubled, growing by +160% versus the year-to-date average for Monday to Wednesday bulletins, while the News at Ten is up by a third [33%].

Yesterday’s figures follow on from other ratings peaks already this week across News and Daytime.

Only the mornings after the EU Referendum and the 2017 and 2019 General Elections had bigger audiences (with extended coverage on these days).

Viewing in daytime was up year-on-year by +32%.

With 1.5m viewers, it was This Morning’s biggest audience since the Beast from the East in March 2018 (excluding the extended Royal Wedding special in October of that year).

With 1.3m viewers, Loose Women  had its biggest audience since October 2014.