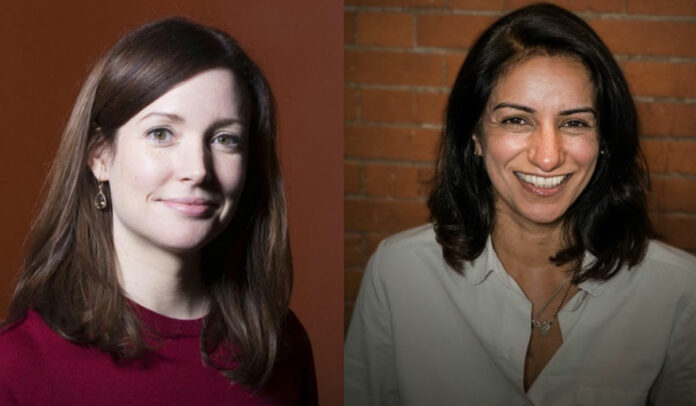 The Garden, part of ITV Studios, has announced that Nicola Brown (left, main photo) has been appointed as Director of Programmes.

Brown will begin her new role in March.

She joins from Channel 4 where she was a Commissioning Editor in the Specialist Factual team. There she oversaw SAS: Who Dares Wins and a raft of new series including the currently airing Meat the Family. She also oversaw the upcoming Joanne Lees and Peter Falconio crime series, and factual digital strand True Stories.

Prior to Channel 4, Brown was Head of Documentaries at Shine. She was executive producer for the award-winning Hunted and Celebrity Hunted series and The Island with Bear Grylls.

Other production credits include RDF’s award-winning Secret Life of 4, 5 and 6-year-olds, Educating Cardiff for Twofour and 24 Hours in A&E during a first stint with The Garden.

In addition, Ninder Billing has been appointed as Head of Specialist Factual.

Billing has been an Executive Producer at the company for the past two years, overseeing projects including BAFTA-nominated Operation Live on Channel 5, ITV’s Police Tapes series, BBC Two commission Five Star Renovation: Inside The Luxury Hotel (w/t), and The Unshockable Dr Ronx (w/t) for BBC Three.

She has a long-track record as an executive producer and commissioner of innovative programmes. This ranges from popular documentaries and formats to live events and current affairs. She was previously a commissioning editor at Channel 5.

“Nicola is the perfect addition to the senior team”, said CEO Temple.

“Already known and respected by many at The Garden, she has a stellar track record, having worked on some of the most memorable Channel 4 factual hits of recent years, and so we’re very lucky to be able to benefit from her creative and production firepower.

“I’m also delighted that Ninder has agreed to lead the charge on our expanding specialist factual slate, building on the success of the brilliant Operation Live.”

Brown said: “I first worked at The Garden almost a decade ago. I’m thrilled to be able to take this opportunity to rejoin the team.

“The Garden has an extraordinary reputation for delivering projects of scale and ambition with real heart. I look forward to contributing to this impressive body of work.

“I’ve really enjoyed my time at Channel 4, thanks to Danny, Fatima and my colleagues for all their support.”

Billing said: “I’m really excited to be drawing on The Garden’s amazing documentary heritage and helping to take it into a new territory.”