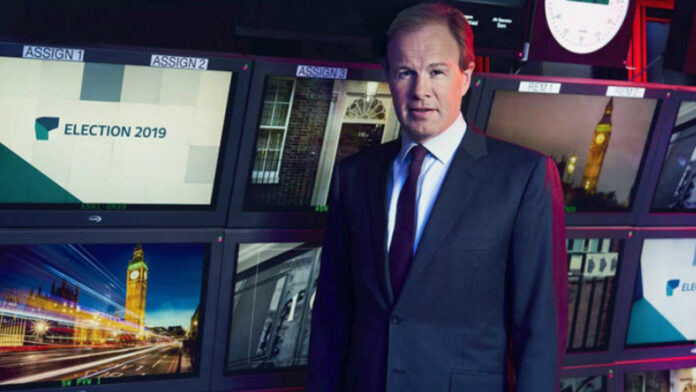 ITV has today confirmed its lineup for its overnight election programme, including George Osborne, Ed Balls and Ruth Davidson.

Tom Bradby will return as the lead presenter of Election 2019 Live: The Results and will be accompanied once again in the studio by Ed Balls and George Osborne.

In the race to reveal who will be entering the door of Number 10, they will be joined by a stellar cast of insiders providing insight and analysis, including:

Political Editor Robert Peston and National Editor Allegra Stratton, aided by a journalist at every count around the UK, will provide breaking news and informed analysis as ITV News aims to continue its long history of calling the results ahead of the competition.

Nina Hossain will be on hand as ITV opens its Election Newsroom – with ‘Peston’ co-presenter Anushka Asthana, and her touchscreen from the programme – to take viewers behind the scenes.

Renowned psephologists Jane Green and Colin Rallings will also return to spot the trends before anyone else and interrogate the results of the joint UK broadcasters’ Exit Poll – will anyone have to “eat their hat” or will the results prove too unpredictable?

Colin and Jane will identify the key results that tell us the story of the night.

ITV News’s top correspondents will be with the major party leaders and be live in every nation and region of the UK to interpret the local, regional and national stories of the night.

The ITV News social media accounts and website will livestream the broadcast and the ‘Calling Peston’ podcast will go live behind the scenes, with a special podcast being produced as the night unfolds.

The following morning, coverage will continue in Good Morning Britain from 6am, presented by Piers Morgan and Susanna Reid with Kate Garraway and Charlotte Hawkins, along with political editor Ranvir Singh, who will be live in Downing Street.

They will be joined by a line-up of experts and politicians including Nicky Morgan, Sir Vince Cable, Heidi Allen and Sir Nicholas Soames.

From 9.25am, Julie Etchingham will present Election 2019 Live, revealing the developments and reaction to the results of the General Election with ongoing expert analysis from correspondents in Westminster and across the country.

“This general election is shaping up to be one of the most gripping and unpredictable, with the typical twists and turns in the lead up to polling day amplified by the pressure of the looming Brexit deadline”, said Tom Bradby.

“We will deliver intelligent conversation and the inside track as we analyse the results and what they mean for the next government.

“Our guests include leading academics Colin Rallings and Jane Green, with former MPs George Osborne and Ed Balls returning to guide us through election night.

“Allegra Stratton, Nina Hossain, Anushka Asthana and Robert Peston will host the night, alongside ITV journalists stationed across the country.”

Julie Etchingham added: “The ramifications of this election will play out across the country in a way that has not been seen for generations and ITV will be there first.

“Throughout the morning we will provide insight, analysis and expert opinion as we unpick the results of this historic election and discuss the next steps for Parliament and the people as we begin to anticipate the implications for the country.”