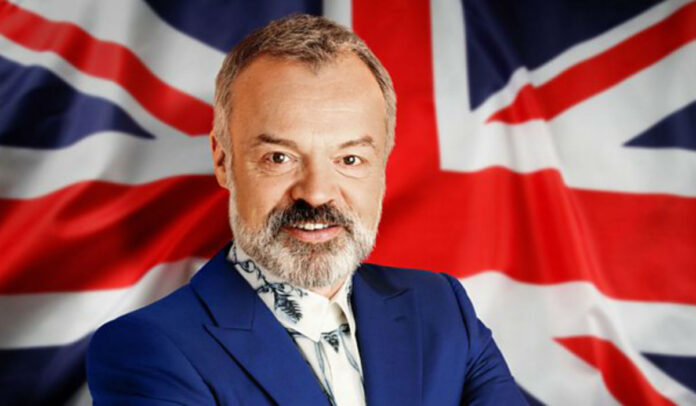 Graham Norton will be on hand to kick off a night of Eurovision-themed programmes on BBC television on Saturday 16 May.

On BBC One in Eurovision: Come Together the British public will get the opportunity to take part in a live online vote to choose their all-time favourite Eurovision song from the past 64 years.

Following that, Norton will provide commentary for Eurovision: Europe Shine A Light, which replaces this year’s Eurovision Song Contest.

The show will honour all 41 songs that would have competed in the 2020 contest; as well as providing plenty of surprises for fans and viewers at home.

Obviously this year’s Eurovision has been cancelled but what can you tell us about Eurovision: Come Together?

GN: Well, we are going to make Come Together as live as possible so it will still feel like event TV, hopefully.

It’s a big celebration of Eurovision where the UK can for the first time ever choose its favourite song of all time – that’s not been done before, so that’s pretty exciting.

I really hope people get involved and vote for their favourites like they would have on the night.

There’s also going to be some audience interaction which will involve videos from the UK’s biggest Eurovision fans.

Come Together feels like a celebration of Eurovision past and present. Can you tell us any of your stand out moments?

GN: I’ve loved the Irish entries of course, in particular when we had our winning streak in the 90s!

I love to see people having fun with their Eurovision entries, being bold with their choices and keeping the competition exciting and unpredictable for audiences.

Conchita winning was a definite high for me, as it was just so out of the box and so different. It was amazing to see such a range of countries and cultures come together backing her to win.

It epitomised the Eurovision world for me.

How did you feel about Eurovision 2020 being cancelled? What will you miss the most?

GN: I was very upset, we all were, but people’s safety has to come first of course.

I always enjoy arriving in the host city and getting the chance to fully immerse myself in the excitement of the competition; there’s always a Eurovision fever that takes over.

No matter how many rehearsals I might have watched, there’s nothing quite like the atmosphere on the night.

Something special happens when it all kicks off and that winning spot is anyone’s for the taking.

I’m disappointed for the artists too and the teams that work behind them.

They all work for so long to make this wonderful night of TV happen so it’s sad that the songwriters will also miss out on their time to showcase their songs to the audience.

Did you have any favourites from 2020 that you were excited to see?

GN: Oh, lots. I think it was definitely going to be an exciting year for Iceland and those iconic jumpers.

It was also going to be a really special one for the UK as it’s the first time in a while that we’ve worked with a label; so it would have been fun to see the reaction to James’ performance.

How will your preparation for Come Together differ to your usual Eurovision routine?

GN: I have to admit that there’s something nice about looking back at all the greatest Eurovision moments with my slippers and a glass of vino to hand!

I can’t say I’ll miss the little hut where I normally commentate from, but I’ll certainly miss sharing gossip with my fellow commentators and getting to witness all the performances live.

What is it about Eurovision that makes it so good at bringing people together? Do you feel it will be missed more than ever due to the current circumstances?

GN: I think Eurovision offers a real escapism for people, which is something we need more than ever throughout these times.

Every year it promises endless fun and unpredictable performances. I love seeing people across the world united by their love of entertainment.

This year I think Come Together will be a fantastic way for people at home to celebrate the amazing spirit of the event; and hopefully give them a chance to take their minds off the current situation for a few hours.

Speaking of interval acts, can you tell us about your most memorable one from the Eurovision catalogue?

GN: I think it would have to be Riverdance’s performance for Ireland’s interval act in ’94.

It was one of those moments you knew would go down in Eurovision history, instant goosebumps!

You’ll be chatting to James Newman, this year’s UK act, during the show. Are you disappointed he won’t get a chance to take to the stage in Rotterdam?

GN: Absolutely. It’s such a shame for all of this year’s acts as they’ve put a huge amount of work in to get to this point.

I’m really looking forward to chatting with James about how he has felt about it all; getting an idea of what he had planned for his performance on the night and of course what is up next for him!

Can you tell us about the panel of Eurovision ‘experts’ who have shortlisted the songs for Eurovision: Come Together? Is there a secret fan club we don’t know about?

GN: Well there’s nothing secret about the love this panel have for Eurovision.

The likes of Rylan Clark-Neal, Mel Giedroyc, Scott Mills and Ken Bruce plus former UK Eurovision artists and some super fans have shortlisted some of their most memorable performances; so we’re sure to have an eclectic mix with something for everyone in there.

Do you have any tips for how viewers can make the most of the night from home?

GN: I think some sort of Eurovision bingo is always fun; and maybe putting together your own shortlist of iconic performances!

Having a watching party with your family and friends via phone or video call is also a great idea; as I’m sure everyone is well practiced at these now. Some themed cocktails never go amiss.

Eurovision: Come Together kicks off this weekend…