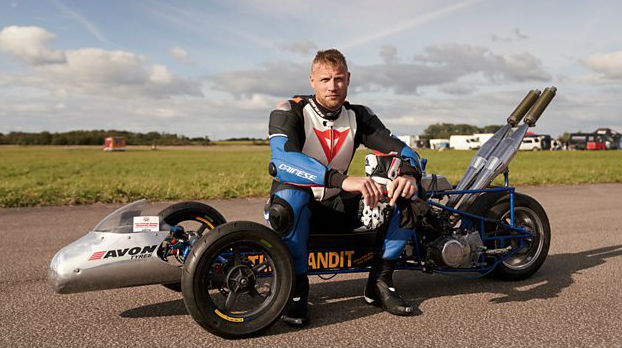 Cricketing champ Freddie Flintoff has joined the new lineup of Top Gear, which is set to return to BBC Two on Sunday 26 January at 8pm

Fresh from the success of their first series together, the entire new line up of presenters – Freddie Flintoff, Paddy McGuinness, and Chris Harris – get up to ever more mischief as they travel the globe in pursuit of hijinks and motoring mayhem.

Apparently we should expect to see bungee jumping in a car, an epic race between a fighter jet and the latest McLaren hypercar, a spectacular roadtrip through Peru plus top celebrity guests in the studio, and lots of laughs.

Ahead of the new series, the Beeb caught up with presenter Flintoff to get the inside track on what’s in store…

FF: We went to Peru, which was amazing. The Incas built the roads years ago. They were so far ahead of their time that I’m inclined to believe it’s actually aliens because some of the structures and the roads are so regimented, I just don’t think it’s possible.

It’s almost like the Egyptians with the Pyramids. The really nice thing about Peru is the people.

They are so welcoming, they’re so proud of their country and so eager to show it off.

So clean from your pollution and plastic and litter. They have real pride in their country. I love Peru.

What were you doing in Peru?

The premise is that you’re led down the route of believing you’re going to be on Route 66 doing an American road trip, but instead it’s an original one in Peru.

So Chris has got this Dart, which is an American muscle car.

What did you drive?

FF: I went with a 1980s VW Campervan. Even though it’s not an American car, it’s perfect for an American road trip, and I’ve always, always loved them.

I had never driven one before, so I thought: “This is the chance to do it.” It did amazingly well, without giving too much away.

We were going up this mountain that was 15,000 ft up. I’d never otherwise go to Peru and drive round it for a week. It was an incredible, incredible trip.

Bungee jump in a car

In the new series, you do an extraordinary bungee jump in a car from the top of a high dam in Switzerland. Can you recall how you felt just before the jump?

FF: The bizarre thing was, I was quite relaxed about it. I’ve done stuff like that before.

Then, they hoisted me up in the car, and I just thought: “What am I doing? Why?!”

I’ve done bungee jumps before, and they’re actually alright. The problem with that one was that if you’re doing a normal bungee jump, you’ve got a rope around your feet and you know you’re attached.

But in a car you can’t feel anything – you are just sat there. I was trying to style it out a little bit but…

What worried you most about it?

FF: My main concern was that it’s not attached to a fixed thing. It’s a crane.

Also if I had seen that crane driver before I did it, I’m not sure I’d have done it.

He looked worried, he looked like it was his first day on the job! I was also worried about the crane and the thought of something like 7 tonnes of that coming down.

I just imagined this crane toppling over, that was my main concern – all for TV!

Tell us what you enjoy about working with Paddy…

FF: He makes me feel so clever! No, we’re from similar areas, both from Lancashire, not brought up in too dissimilar a way.

We’ve probably got similar values as well from when we grew up. I love Paddy’s enthusiasm for things.

One of the nice things about travelling with him is that, by his own admission, he wasn’t well travelled before.

He’d been to Portugal and I think he’d been to America once. So when you go to countries with him now, he’s like someone who’s opened their eyes for the first time.

And that’s kind of infectious, isn’t it? He also loves cars. And he’s funny, isn’t he? Let’s be honest.

Do you feed off Chris’ expertise about cars?

FF: Yes. I feel I’m learning all the time. I love cars – I always have done since I started driving.

But I just listen to him; he talks about auto stuff and I don’t even know what he’s on about. It’s a great learning curve.

I’m asking him questions all the time – like you would in a cricket team where you’ve got someone more senior and you try learn as much as you can. I think you do that with Chris.

You see him drive and it’s unbelievable. He can do a piece to camera when he’s got a Ferrari 488 going sideways and he’s just talking as if it’s the most natural thing in the world. He is amazing.

After 28 series, why is Top Gear still so popular?

FF: People love cars, people really do. I know the world is changing in what people want to drive and electric cars are coming in, but people genuinely love them.

I think Top Gear is also an entertainment show. So it combines quite a few things that people actually really like.

Do you relish being a TV presenter?

FF: Yes, although it isn’t what I thought I’d be doing. I finished playing cricket at 31, and all I ever wanted to be was a cricketer.

Then I’ve stumbled into TV presenting, and, I’ll be honest with you, I’m not quite sure what I’m doing!

I just turn up and just do whatever. I think I’m going to get found out every day!

What do you love about it?

FF: I just see it as an opportunity to do stuff that I’d never get the chance to do otherwise.

I think of all the places I went playing cricket, which were amazing. But since retiring, I’ve been to places and actually seen them, rather than just visiting a cricket ground and a hotel.

Driving the roads of Peru, say, which is an unbelievable country. Yes, it’s for a TV show, but the thing that excites me more than anything is just having the chance to go to these places.

I never thought I’d get the chance. I look at my life, I’m from Preston, and now I’m driving round Nepal and Peru and doing bungees in Switzerland. It’s bonkers!