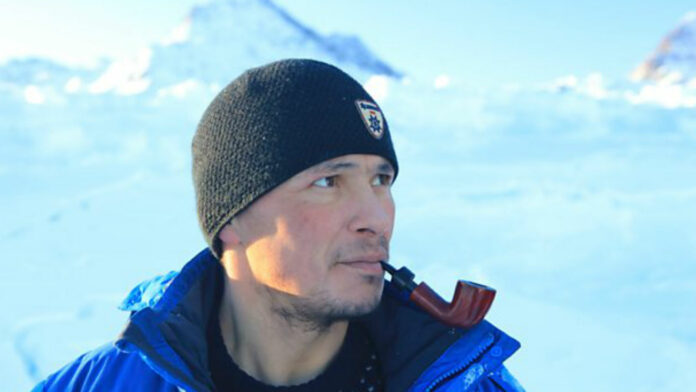 BBC Four is set to screen a fascinating ‘slow’ documentary on Christmas Eve that promises to give us an insight into life in an Inuit settlement in Greenland.

The Last Igloo is a very simple film: the story of one man – an indigenous hunter called Julius (pictured above) – as he sets out from an Inuit settlement into the wilderness of Greenland to fish, hunt, and eventually build an igloo.

The 90 minute doc was produced and directed by Christian Collerton and here he discusses how the project came together and why we all need to watch it:

What attracted you to the Last Igloo project?

CC: The wilderness of the frozen North is fascinating, it’s one of the planet’s last frontiers. The hunters of East Greenland are at a crossroads as global warming and social and technological change is rendering their traditional roles obsolete.

On a personal level I think our modern world is so hyper-connected there was something really attractive about going somewhere with no TV, no internet (or even roads for that matter) and exploring the wilderness.

Like many people I live my life on my phone and online and I wonder whether we are losing our relationship with nature.

The way we tell the hunter’s story was a conscious riposte to the white noise that drowns out much of modern life as we can enjoy wallowing in all the tiny details of his adventure on the ice.

What challenges did you encounter while filming?

CC: The temperatures of -15C meant our camera equipment was really put to the test – one of our drones broke almost immediately and one of our main cameras packed up not long after that.

Ironically, though, it was global warming that turned out to be our biggest foe: The sea ice hadn’t formed in several places, but more importantly it proved difficult for Julius – the Inuit hunter we were filming with – to find the right snow to build his igloo (igloos require a very specific hard-packed snow the locals call Pugaq).

Climate change is one of the central themes of the film but it also threatened to stop us making it.

What was the most memorable moment from filming?

CC: The whole experience of life in remote East Greenland, filming on the sea ice and documenting the hunting skills of Julius was a real privilege but the most memorable moment came at the end of one of our final filming days.

We had just finished building the igloo and the film was all but done. We were just about to get the skidoos back to the village when suddenly the night sky lit up with huge dancing sheets of green and blue – the Northern Lights.

The film is a visual poem to the Inuit lifestyle, how it dovetails with the environment and how both are in danger or dying out so it was fitting that nature should have the last word.

Why should people watch the film?

CC: The film is an immersive sensory experience. Our digital age is a constant drain on our attention, we are surrounded by phones and computers.

Modern life is an endless, anxiety-inducing information assault and the style of much of modern television contributes to this, aggressively throwing the most dramatic footage at the viewer.

This film is the antidote to that, it celebrates both the tiny detail of the Inuit skills as well as the breath-taking grandeur and silence of the East Greenlandic landscape.

What do you hope they’ll take away from it?

The Last Igloo is an attempt to document a dying way of life before it’s too late.

It’s easy to think of climate change as a remote problem but to the people of Greenland and the rest of the Arctic it’s very real.

As Julius says the world is literally melting away before his eyes.