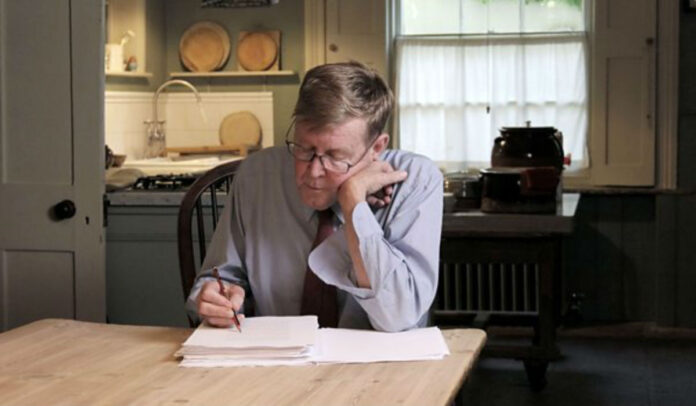 As reported by Mediashotz in April, Alan Bennett’s award-winning Talking Heads series is being revamped and updated.

The new series features a bevvy of British stars including Jodie Comer, Sarah Lancashire, Imelda Staunton and Martin Freeman among many equals.

The BBC, which commissioned the series, caught up with the famous Yorkshire scribe to ask him all about it…

What were your thoughts when Nick Hytner called to say that the BBC wanted to make new Talking Heads?

I was delighted to hear about Talking Heads, though I didn’t have any idea how Nick was to do them… and I still don’t, though I much look forward to them.

I’ve had to refresh my memory of some of them and have even found myself laughing.

Can you tell us a little about your two new Talking Heads scripts – An Ordinary Woman and The Shrine?

The new monologues are both for women and both quite bleak.

An Ordinary Woman is suggested by Racine’s Phèdre, which I did for my school certificate in 1950 and have always felt a bit of a cop-out.

The Shrine is about one of these makeshift memorials one sees at the roadside where there has been an accident and where people temporarily leave flowers.

Even though they’re not specifically tied to this time period, do you feel there’s a greater resonance to all or any of the Talking Heads, in light of the current Covid-19 situation?

I don’t think people are any lonelier if that’s what you mean. My life is much the same as I’m fairly housebound anyway.

The series has attracted a phenomenal cast. How involved in the casting process were you?

The cast is astonishing and they all agreed at the first time of asking.

I hope this is because they liked the scripts (or maybe it was because nobody else was offering).

Anyway I’m most flattered. And grateful. And to the directors too. They were very prompt in saying yes.

Did you speak with any of the actors before filming?

Some of the cast rang me, though the only one I knew a little is Imelda Staunton.

They called me to tell me they were having a good time, which one is always glad to know, and to thank me.

I felt I should be thanking them and the directors (and whoever had the idea of reviving them in the first place).

They didn’t have any specific questions. They aren’t written in broad Yorkshire.

Monica Dolan wanted to know the meaning of ‘wenged’. I’m not sure if this is an actual word or one just made up by my father (he often made up words).

It means ‘chucked’ as in ‘wenged it in the hedge’. ‘Splother’ is another meaning for ‘fuss’ or ‘to-do’.