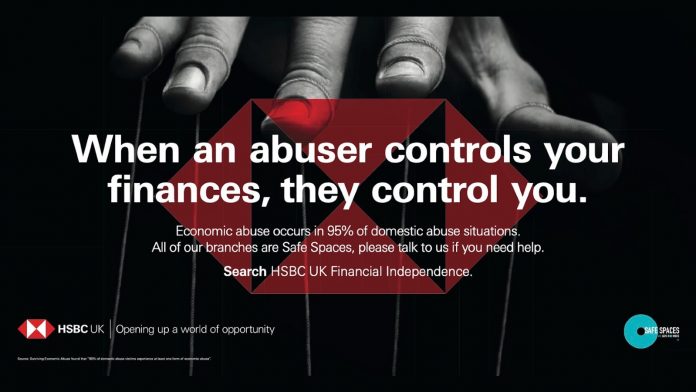 HSBC UK has made all its branches Safe Spaces where people experiencing domestic abuse can take their first step to financial independence by seeking specialist advice and support.

Professional training has been provided to more than 4,000 employees across all HSBC UK branches.

Financial abuse frequently goes hand-in-hand with domestic abuse and can be used as a tool to trap a person and render them even more powerless by taking control of their finances.

Wunderman Thompson’s latest campaign for the brand carries the message: “When an abuser controls your finances, they control you,” and raises awareness of the Safe Spaces scheme by showing the shocking link between financial and domestic abuse.

“The campaign is part of a wider awareness drive to the ways the bank can help them regain financial independence and take back control of their lives.

HSBC UK’s existing “No Fixed Address” service, which allows people without a permanent address to open an account, can also help people experiencing financial abuse who have escaped their circumstances but do not yet have a permanent residence.

The charity Surviving Economic Abuse revealed that 95% of domestic abuse cases include a form of economic abuse but, shockingly, 69% of people have never viewed the two as related, even though without access to money and the things that money can provide, it is difficult to leave an abuser and find a safe place to live.

To support people experiencing financial abuse, HSBC UK is continuing to invest in its ‘No Fixed Address’ service.

Working with Shelter and other charities, the bank has helped over 2,700 people, with the service championed through the award-winning campaign, ‘Vicious Circle’, also developed by Wunderman Thompson.

HSBC UK has made all its branches Safe Spaces, supporting domestic abuse charity Hestia’s UK SAYS NO MORE campaign. The safe spaces are open to everyone, whether or not they are an HSBC customer.

The nationwide campaign helps to raises awareness of the struggles faced by those experiencing financial abuse, explaining that a lack of access to funds or not having a bank account should never be a barrier to escaping an abusive relationship.

The campaign goes live across out-of-home, supported by an impactful ‘live’ billboard in Spitalfields Market 14th-15th June, dramatising the campaign message with a performer being controlled by strings on the billboard.

Sarah Mayall, Head of Brand Marketing at HSBC UK said: “Escaping an abusive relationship isn’t as simple as walking out of the door.

“We’re proud to be playing a part in helping people experiencing abuse to take a step towards financial independence by accessing a Safe Space with HSBC UK.

“Through this campaign we hope to raise awareness of the service and the shocking link between domestic and economic abuse.”

Mike Watson, Creative Director at Wunderman Thompson UK, said: “Having worked with HSBC UK on the Vicious Circle campaign and seen the impact that’s had on so many real people, we’re proud to work on this latest campaign in support of people experiencing financial abuse.

“The bold creative execution, paired with the shocking stats around economic abuse, aims to convey the level of control that the abuser holds over their victims.”