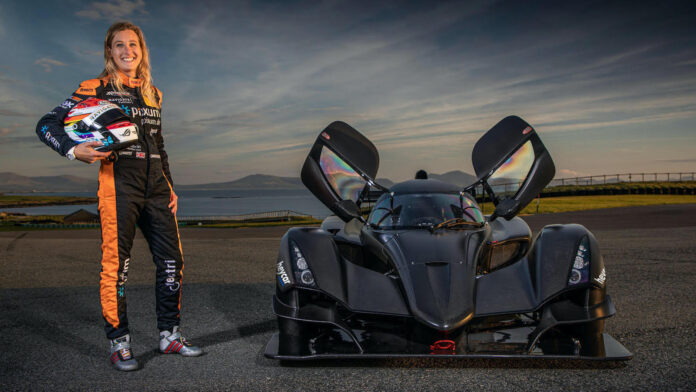 The online car marketplace has been unveiled as an official partner as Charlie embarks on the championship series, which takes place at iconic race tracks around the country, starting at Silverstone and finishing at Brands Hatch on November 14.

As well as being a regular on podiums for her racing abilities, Martin is widely regarded as a diversity pioneer in motorsport, breaking down barriers as the first transgender racer in a traditionally male-dominated industry.

She has competed in many high profile races, including the Le Mans Cup and the Ginetta GT5 Challenge, as well as making history as the first transgender racing driver to ever compete at the Nurburgring 24 hour race in Germany in 2020 on its 50th anniversary.

The 39-year-old from Leicester also has a strong following among gamers after being named as one of Formula E’s guest drivers for its ‘Race At Home’ racing challenge.

She also has a dedicated and engaged audience of more than 18,000 followers on YouTube, with the professional racer using her platform to promote LGBTQ+ issues and inclusivity in the sport.

Now her racing suit and Team Praga R1 prototype car for the Britcar Championship will feature the heycar logo as the company shows its support for Charlie’s diversity and inclusivity stance.

Heycar said it was “a passion that is shared by all those” at the company, highlighted by the launch of its People’s Forum in 2020 – a group with the mission to represent the diversity and inclusivity of the heycar UK team and build towards an equal experience for members belonging to underrepresented groups.

As a part of this initiative, the heycar team has seen a series of speakers deliver inspiring talks, including from Charlie herself, leaving a huge impression on the heycar UK team; encouraging them to reach further, leading the conversation about the importance of improving diversity in the industry.

“It’s vital that people from the LGBTQ+ community are in all sports and all walks of life, and that they’re inspiring and encouraging others”, Martin said.

“I’m so passionate about breaking down gender stereotypes, not just in motorsport and automotive, because people should do what they want to do and what they’re good at.

“That’s what motivates me to achieve success and be that person others can look to –  and I’m incredibly grateful to heycar that they share my passion and want to support me to do even more.”

“She’s someone we’ve admired for a long time for her achievements on the track, as well as her work in promoting diversity and inclusion.

“She’s pushing forward the conversation in the automotive industry and beyond and this is an area that is incredibly important to us at heycar.

“We had the pleasure of having Charlie deliver an inspiring talk on diversity and inclusion to the heycar UK team in 2020, discussing the challenges she faced in the past and the ways that we can work together to make big changes in the industry.

“We’re delighted to be able to continue to support Charlie on her journey, and we can’t wait to see her in action at the Britcar Championships and be part of her team for a long time to come.”

LGBTQ+ cyberbullying: Tackling a curse of the digital age