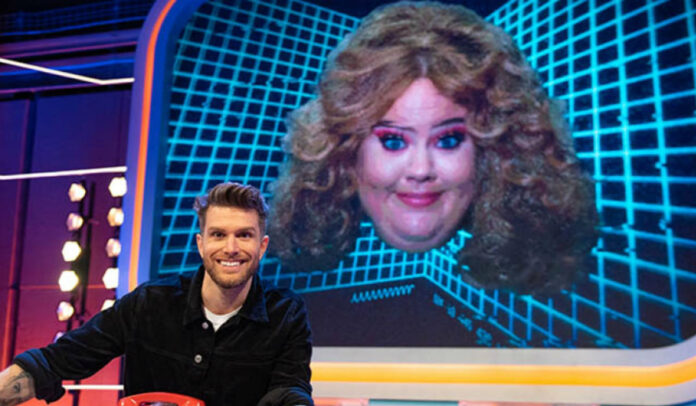 The show is hosted by comedian Joel Dommett. It involves celebrities making more hilarious prank calls to win cash for members of the public.

Hey Tracey! was one of the biggest new entertainment launches on ITV2 last year. It was extended to include a Christmas Special.

In real life if you don’t know the answer to a question you can ask Siri or Alexa. But in this show unfortunately you’re stuck with Tracey ITV2’s very own virtual assistant.

Played by comedy writer and performer Donna Preston, if celebrities don’t know the answer to Joel’s unusual questions, they can enlist help from Tracey.

Each time our celebs summon her help, Tracey can connect them with someone in the real world that might know the answer. Less phone-a-friend, more like comedy cold calling.

Highlights from series one included Ferne McCann calling a surgical supplier to ask if they do cosmetic surgery to reduce genitals; Kem Cetinay inventing an imaginary son in an attempt to find out how many bones a shark had; and Pussycat Doll Melody Thornton being put on hold by a Chinese supermarket while the staff debated which fruit smelled like French kissing your dead gran.

“I can’t wait to do another series of Hey Tracey… it’s a shame they have asked Tracey back too”, Dommett said.

“I was hoping they would sack off that pointless robot and put my name in the title.

“I’m excited to see another set of famous faces squirm as they try and find the answers to my weird and wonderful questions.”

Paul Mortimer, ITV’s Head of Digital Channels and Acquisitions said: “After a successful first series we’re delighted to be back working again with Dr Pluto on this fun and crazy show.

“Joel brings his unique style and humour as always. I’m looking forward to seeing more celebrities try to convince the general public to help them find the answer.”

James Abadi, Executive Producer, Dr Pluto said: “We had great fun last series and we are over the moon to be back.

“We can’t wait to get started on the second series and see how far the celebrities will take it to find the answer they are looking for.”

Hey Tracey! is a Dr Pluto production for ITV. It was commissioned by Paul Mortimer, ITV’s Head of Digital Channels and Acquisitions and Peter Tierney, Assistant Commissioner, Entertainment, ITV.

The executive producers are James Abadi and Sam Pollard and Series Producer is Meriel Beale.