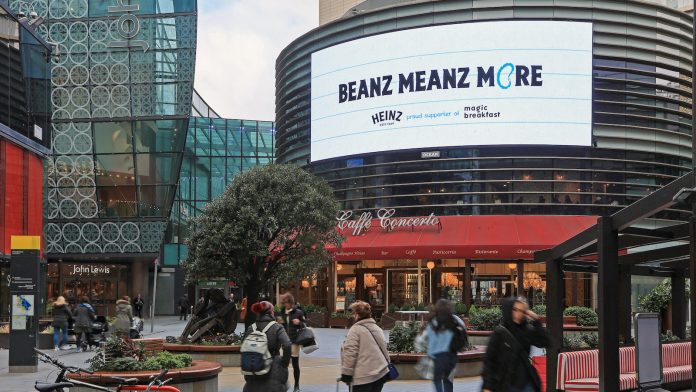 The innovative campaign uses Ocean Outdoor’s state-of-the-art LookOut technology to show how hard it is for children to focus when they go to school hungry.

The chosen locations all have more than 30% of children living in poverty.

The campaign was developed and planned by Ocean Labs with the creative execution by DentsuMB.

Bringing to life the daily challenges faced by children who go to school hungry, Ocean’s proprietary LookOut technology creates the interactive experience, showing the severity of food insecurity experienced by many children up and down the UK.

As passers-by approach the screens they will be able to clearly read the sentence ‘It’s harder for children to focus when they’re hungry’.

The longer they stare, the sentence becomes more difficult to read, with various letters losing focus themselves and developing a life of their own through animation.

The screen then asks people to donate £5 by text to the charity Magic Breakfast, which will provide one child with almost a month’s worth of ‘magic’ breakfasts and help the 1.7 million children at risk of starting the day hungry.

Heinz will match all donations received by text in the week of February 21 to raise vital funds for Magic Breakfast.

The campaign is part of a five-year partnership between Heinz and Magic Breakfast, who work with more than 1,000 partner schools in the UK to provide nutritious breakfast food, such as Heinz No Added Sugar Beanz, to around 200,000 children.

It furthers the 16 million meals already pledged by Heinz to Magic Breakfast since their partnership began in 2019.

Lucy Cooke, brand manager at Heinz Beanz, said: “It’s more important now than ever before that we continue our fight against child hunger with our brilliant partners Magic Breakfast.

“As families up and down the country face increasing financial pressure, we hope that our immersive campaign will raise further awareness of the issue of child hunger and encourage widespread donations to a vital cause.

“At Heinz, we strongly believe that no child should be too hungry to learn, that’s why we’ve already pledged more than 16 million meals to help those at risk of going to school hungry.

“By donating through these billboards, you will be contributing toward helping some of the most disadvantaged children in the UK, helping to ensure these pupils can start their day with the energy and nutrition they need to make the most of their morning lessons!”

Lindsey Macdonald, CEO Magic Breakfast, said: “We’re so excited to be working with Heinz on this interactive campaign.

“There’s still a lot to be done to raise awareness of the scale and impact of child hunger in this country, especially the effect hunger can have on a child’s learning which has long-term consequences on that child’s life.

“Magic Breakfast supports children living nearby to all nine of the billboards’ locations so this is a fantastic opportunity to raise awareness of the issue in those communities.”