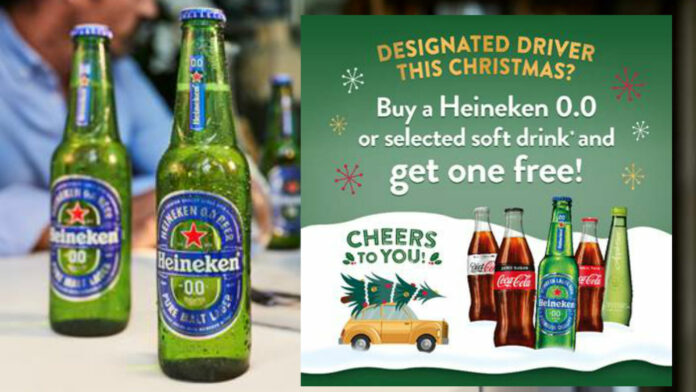 For the tenth continuous year Greene King has joined forces with Coca-Cola and new partner Heineken for the Christmas anti-drink drive campaign in an effort to tackle drink driving.

For the first time, designated drivers can now opt for a great tasting alcohol-free Heineken 0.0, helping teetotal drivers to not feel left out on a night out during the festive season, the company said.

According to the Department of Transport, the estimated number of reported drink drive related accidents in Great Britain has fallen by 71% since 1979, down to 5,700 compared to 19,470 almost 30 years ago.

Since its foundation 12 years ago, the Designated Driver campaign has continuously helped people get home safely during the festive season and in 2019 will be delivering +25% redemptions.

Phil Thomas, Chief Commercial Officer at Greene King, said: “As a leading pub company, we have an important role to play in helping to promote responsible drinking and we have given away around a quarter of a million free Coca-Cola products over the past decade as part of the Designated Driver campaign.

“We have seen a huge increase in the popularity of low and no-alcohol products in our pubs.

“Our range now offers more than 10 different low and no-alcohol products including beers, wines and ciders, so we are really proud to add Heineken 0.0 to our Designated Driver offering as we celebrate this significant milestone of the campaign.”

Paul Robertson, Associate Director, On-Premise at Coca-Cola European Partners GB, said: “We’d like to thank Greene King for partnering with us for the last 10 years on the Designated Driver campaign and continuing to evolve the platform to ensure it remains relevant to today’s consumers.

“Greene King should be applauded for its continued leadership in helping to promote responsible drinking and embracing the role soft drinks can play across its estate, especially on the lead up to Christmas. Here’s to another 10 years of partnership!”

Cindy Tervoort, Marketing Director, Heineken, said: “We are really proud to be part of this initiative with Greene King and to be able to offer Heineken 0.0 to a growing consumer demographic during the festive period.

“As many people unite in bars across the country during the Christmas party season, we feel it’s important to offer a choice for everyone at this time of year whilst also encouraging people to be safe on the roads.”

As part of the Designated Driver campaign, drivers will receive a buy one, get one free voucher to use on their next purchase when they show their car keys at the bar and buy a Heineken 0.0, any 330ml bottle of Coca-Cola, Diet Coke, Coca-Cola Zero Sugar or 275ml Appletiser.

Over 1,000 Greene King pubs across the UK, including Greene King Local Pubs, Hungry Horse, Chef & Brewer and Farmhouse Inns, are taking part in the Designated Driver promotion which runs until last orders on 1 January 2020.