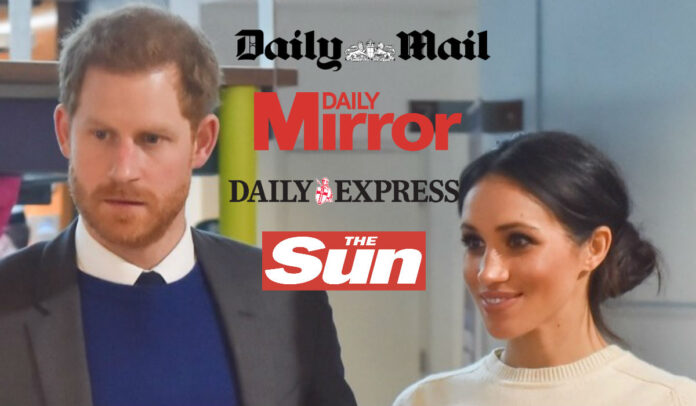 Former Royals Harry and Meghan have issued a notice saying they will no longer engage with the British tabloid press.

The announcement came in letters sent by the LA-based couple to The Sun, the Mirror, Daily Express and Daily Mail.

Harry and Meghan will no longer deal with the named titles’ print or digital publications.

Tabloid newspapers refers to the size of the journal – which tend to be smaller than traditional broadsheet newspapers. Tabloid journalism, however, is a popular form of reporting which tends to sensationalise a story.

It’s this style of reporting that appears to be at the centre of Harry and Meghan’s complaint.

The couple has been at war with the tabloid media over its coverage of them for well over a year.

Today’s decision this means the papers will no longer be invited to any media events that involve Harry and Meghan.

The publications will also no longer receive any media updates or photographs from the former royal couple. To all intents and purposes the newspapers have been frozen out.

The full transcript of the letter reads as follows:

As The Duke and Duchess of Sussex now settle into the next chapter of their lives and no longer receive any publicly funded support, we are writing to set a new media relations policy, specifically as it pertains to your organisation.

Like you, The Duke and Duchess of Sussex believe that a free press is a cornerstone to any democracy – particularly in moments of crisis. At its best, this free press shines light on dark places, telling stories that would otherwise go untold, standing up for what’s right, challenging power, and holding those who abuse the system to account.

It has been said that journalism’s first obligation is to the truth. The Duke and Duchess of Sussex agree wholeheartedly.

It is gravely concerning that an influential slice of the media, over many years, has sought to insulate themselves from taking accountability for what they say or print – even when they know it to be distorted, false, or invasive beyond reason. When power is enjoyed without responsibility, the trust we all place in this much-needed industry is degraded.

There is a real human cost to this way of doing business and it affects every corner of society.

The Duke and Duchess of Sussex have watched people they know – as well as complete strangers – have their lives completely pulled apart for no good reason, other than the fact that salacious gossip boosts advertising revenue.

With that said, please note that The Duke and Duchess of Sussex will not be engaging with your outlet. There will be no corroboration and zero engagement. This is also a policy being instated for their communications team, in order to protect that team from the side of the industry that readers never see.

This policy is not about avoiding criticism. It’s not about shutting down public conversation or censoring accurate reporting. Media have every right to report on and indeed have an opinion on The Duke and Duchess of Sussex, good or bad. But it can’t be based on a lie. They also want to be very clear: this is not in any way a blanket policy for all media.

The Duke and Duchess of Sussex are looking forward to working with journalists and media organisations all over the world, engaging with grassroots media, regional and local media, and young, up-and-coming journalists, to spotlight issues and causes that so desperately need acknowledging. And they look forward to doing whatever they can to help further opportunities for more diverse and underrepresented voices, who are needed now more than ever.

What they won’t do is offer themselves up as currency for an economy of clickbait and distortion.

We are encouraged that this new approach will be heard and respected.

This latest move by Harry and Meghan has divided public opinion.

Many have defended the couple saying they should be free to pursue their own life choices.

Others have been more critical saying they have ‘deserted’ the UK in a time of need – amid the coronavirus outbreak.

Durham-baed conservative broadcaster and commentator Darren Grimes tweeted about the “narcissistic and shameless pair or attention seekers” making the move while the entire world faces a global health pandemic. He added that “a period of silence would be welcomed!”

Billions of us around the globe are hiding from a potentially fatal virus. But these two narcissistic and shameless pair of attention seeking wasters can’t help but try and make it about them. Cut ties with all media, a period of silence would be welcomed! https://t.co/r7BkFC1SRh

Harry and Meghan recently moved to Los Angeles where they intend to start building their brand Archewell.

The couple were using SussexRoyal (which we still think sounds like a type of potato), but changed it after they were advised by the royal household they should no longer use the word ‘Royal’.

They’ve complained of unfair treatment by the tabloid titles ever since they married in 2018.