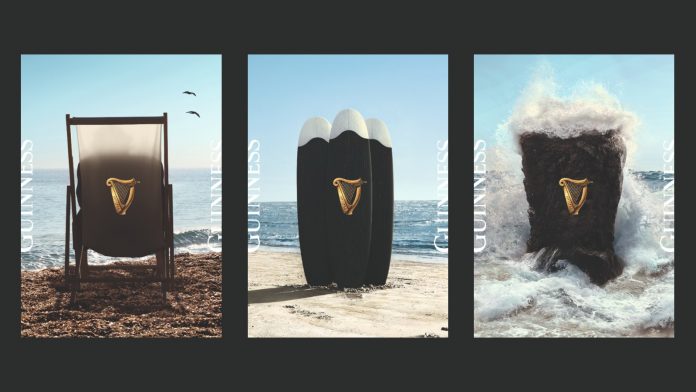 In anticipation for the summer months and long bank holiday weekends, Guinness has launched a new OOH campaign evoking iconic pints of the black stuff in classic summer scenes.

Created in partnership with AMV BBDO, the new work builds on the success of the previous #LooksLikeGuinness campaign, which was launched in summer 2021 to celebrate the reopening of pubs and bars welcoming customers back and led to Guinness being the most talked about beer brand on social media in the UK.

Waves crashing against a rock, people relaxing on a deck chair on a sandy beach, surfboards glistening in the summer sun.

At a certain angle, in a certain light they all make you think of a cool, refreshing pint of ice-cold Guinness.

With that in mind, the brand worked with photographer Catherine Hyland to capture each moment, shot from an observer’s perspective where the much recognisable black and white pint could be naturally inserted into the environment.

Each execution perfectly provides that anticipation for summer and that refreshing Guinness moment. Catherine’s work, known for capturing epic, beautiful landscapes, helped the team make the pint-play both incidental and grand at the same time.

This campaign is live with national OOH, located no more than 500 metres from pubs and bars across Great Britain, alongside running on social media and BTL assets in certain outlets.

John Burns, Head of Guinness in Great Britain, said, “Our new campaign celebrates all those sunny moments that are almost in our grasp and puts Guinness at the heart of the British summer.”

Ricardo Porto and Victor Bustani, creatives at AMV BBDO, added, “To be able to evoke a cool, refreshing, ice-cold pint of Guinness without even showing it, is proof that it is one of the most recognisable and iconic beer brands in the world”.