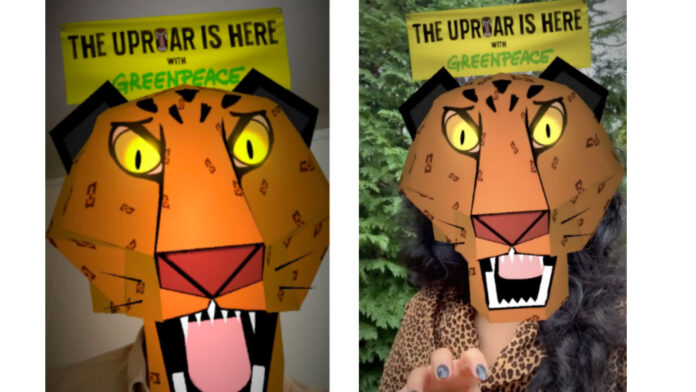 Global digital creative agency Tommy has partnered with Greenpeace UK to create an Instagram and Facebook AR lens following the release of its new shortfilm There’s a Monster in my Kitchen.

The film is designed to raise awareness of deforestation across Brazil for industrial meat and dairy production.

There’s a Monster in my Kitchen, tells the story of a young boy who learns of the heartbreaking reality of rampant deforestation in places like the Amazon from Jag-wah the jaguar.

With Jag-wah the young boy explores how the industrially produced meat and dairy in our kitchens is fuelling the clearance of precious forests and vows to mobilise people to fight the monsters.

The production of industrial meat and dairy is the biggest driver of deforestation globally. In South America, forests are cleared and fires are deliberately lit to prepare land for cattle ranches in forests like the Amazon and to grow soya for animal feed in other precious habitats like the Pantanal wetlands and Cerrado savannah.

“We wanted to give supporters a tool for activism at a time when physical demonstrations are much more challenging” said Chiara Vitali, Greenpeace UK forests campaigner.

“The AR lens is so much fun but at the same time helps to raise awareness of the crucial issue of industrial meat production as the biggest driver of deforestation.

“We hope through the lens more people will see this important message, and that they’ll want to share it with their friends and family too.”

Using augmented reality facial tracking created by Tommy, the AR lens transforms users into Jag-wah. To activate the lens, users are prompted when to open their mouths to then hear the jaguar “roar” in protest.

Above the jaguar’s head, a banner drops down that reads ‘The UPROAR is here’ which – after sharing the lens – encourages other users to join in the virtual protest on Instagram and Facebook.

Will Tunstall, Co-Founder, and Chief Creative Officer at Tommy, said: “With the prevalence and popularity of AR growing by the day, it’s only right that a campaign as important as this has a presence.

“As media consumption has broadened, people choose both what to watch, and when they watch it. To stand out in the crowd and make our voices heard, we must always look for ways to grab attention and add value to people’s lives.

“This lens is a great example of underpinning a simple, fun mechanic with a vital, urgent message.”

Lens can be accessed on mobile here.

Users can further pledge their allegiance to the cause by watching and sharing ‘Monster’,and signing the petition urging supermarkets to cut links with forest destroyers.