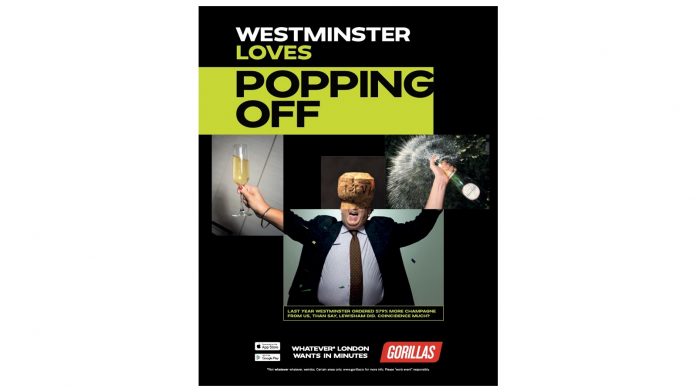 Created by The Or agency, the timely full-age ads are strategically positioned in today’s (14.04.22) Metro and Evening Standard next to articles about Boris Johnson, Rishi Sunak and others breaching lockdown rules at a Number 10 birthday gathering for the Prime Minister.

Four photographs are pieced together showing the torso of a corpulent suited man along with a champagne glass, cork and exploding bottle of bubbly.

Adding fuel to the partygate fire, a disclaimer in small print at the bottom of the ad reads: “Please “work event” responsibly.”

The ad builds on Gorillas Whatever London Wants campaign, featured by Mediashotz last week, and which cleverly brings to life a year’s worth of data about Londoners’ grocery habits.

Danny Barry, Head of Brand Northern Europe, Gorillas, said: “Part of the appeal of the Whatever London Wants campaign is that it allows us to tap into cultural moments that Londoners are talking about, and do so with humour, whilst always linking back to our core benefit: delivering groceries fast.”

The partygate saga may not yet be over, as media reports on Thursday suggested the Prime Minister could yet face more fines.