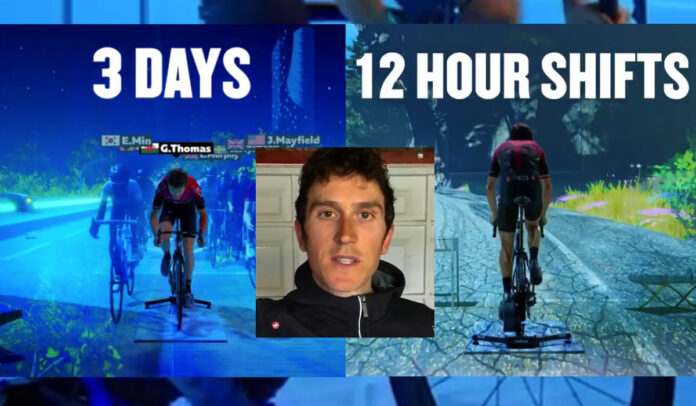 Geraint Thomas’ 12-hours a day for three days cyclathon to raise £100,000 for the NHS has already reached its target.

The 2018 Tour de France winner and Team INEOS rider hoped to raise £100,000 for NHS Charities Together.

From his garage in Wales, Thomas will stream the whole 36-hour experience on Facebook Live, via both his personal account and the Team INEOS feed.

Getting a bit nervous now!! ? #GsNHSZwiftShifts If you want to join me on any of the rides you can sign up over on @gozwift. You can find out more about the rides and donate at the link in my bio. See you all tomorrow!

Pedalling on his turbo trainer bike, Geraint may not be able to head out on the hills; but he will be riding on Zwift, the virtual training platform.

This will allow cycling friends and fans to join him on any part of the journey.

“Like everyone around the country, I have been humbled by the hard work, bravery and professionalism of the NHS”, Thomas said.

“As a small sign of my gratitude and solidarity, I am doing the only thing I know how to do and getting on my bike.

“I know this is a hard time for everyone, but I hope that people will be able to make even the smallest donation to a great cause.

“And if people are keen to join, sign up and race me up the Col du Zwift.”

He is set to make appearances on BBC Breakfast, Radio 4’s Today programme; Chris Evans’ Virgin Radio show; BBC Wales and more during his gruelling bike riding session. He expects to cover hundreds of miles and burn thousands of calories over the three days.

Geraint’s wife Sarah and young baby, who are self-isolating with him in Wales, will be out supporting #GsNHSZwiftShifts all the way.

Cut Media’s team will make sure that the social media content reflects the highs and lows, the laughs and the suffering, as they happen.

NHS Charities Together is a national membership organisation which represents 140 charities. All are currently working with the NHS on a co-ordinated Covid-19 appeal.

It’s already contributed by building four hand sanitiser plants and delivering the product to 28 NHS hospitals around the UK.