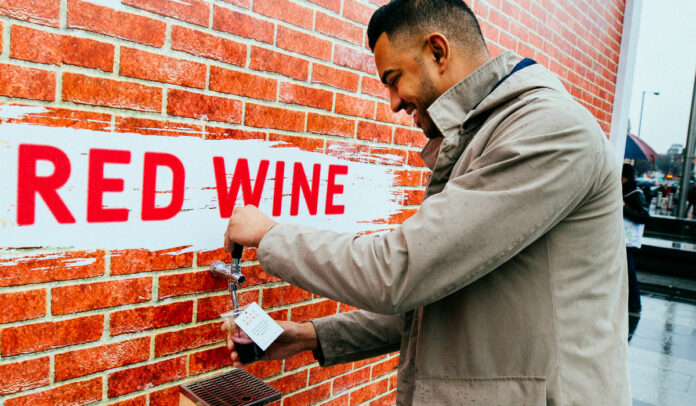 We couldn’t believe it either. But, in what is quite possibly the most tempting promotion ever created, the giant wall of wine is part of a new one day campaign as Vagabond commemorates the 100th anniversary of prohibition.

In 1919 the prohibition era began; wine makers found a way to get around the ban of alcohol when some clever chaps found a lucrative loophole which meant wine could still be sold in the form of bricks!

Winemakers cheekily instructed on their packaging what not to do with the grape concentrate, as ‘it would turn into wine’.

These were the warnings on the bricks:

– Do not put wine brick in a bucket of water

– Do not leave in a dark room

If patrons left the bricks in a bucket of water for three weeks in a dark room, it would transform into wine.

This would legally look as though they were ‘warning people’ against the consumption of alcohol.

Vagabond being the wine heroes they are, marked this special year by celebrating the opening of its new Canary Wharf venue.

On Tuesday 17 December you will find the Vagabond wine wall at the front of Kings Cross Station serving guest glasses of complimentary glasses of red and white wine.

Vagabond told Medishotz that the wine will be served until 8pm tonight. We suggest, you get there early, though, just in case!