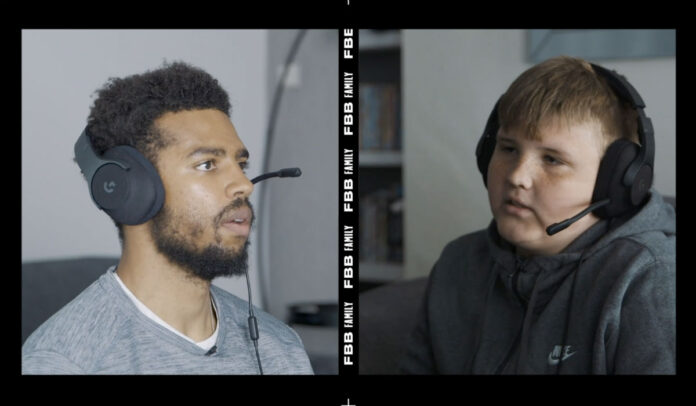 The new initiative is a bid to give young people a space to openly talk about their lives in lockdown,

During Mental Health Week, this initiative will use games of FIFA between young people, FBB practitioners and professional footballers to show this at risk, but often forgotten, group that meaningful conversations can have a positive effect on a young person’s sense of wellbeing.

And that they can happen within the confines of their home. While playing FIFA.

Beyond Walls combines a passion for the game and the psychological process of distraction therapy to help teens open up. Apparently, we are able to have more sincere and meaningful conversations when partially distracted.

The initiative is being launched by a four-minute film starring professional footballer Cyrus Christie playing two young people, Freddie and Bland, at FIFA.

During the games they move into honest conversations about football, mental health and the current lockdown. Cyrus has himself talked openly about his own issues with mental health.

The piece was filmed in their own homes with remote direction from Outsider’s Tom Day; adding a level of production quality difficult to obtain during the lockdown period.

Questions and conversation starters were provided and guided throughout by FBB’s professional practitioners. Parents also gave written permission for Freddie and Bland to appear.

As they open up, they begin to reveal some incredibly insightful thoughts about how to live in today’s world and deal with the lockdown.

“When it comes to the lockdown, there has been a clear trend that teenagers feel isolated and do not feel as though they have a voice”, Jasper Kain, Co-founder of Football Beyond Borders, said.

“We have also seen during this period that gaming is hugely popular and the main avenue in which teenage boys connect with the outside world. We want to harness this popularity as a force for good.

“When used in the correct way, games such as FIFA can be beneficial.

“It provides an opportunity to connect with others in a safe space and give young people a place to talk in a way that is very difficult to achieve in everyday life – especially when that life is spent indoors.”

“Some of the most meaningful conversations I’ve had with my mates, have taken place whilst playing FIFA.

“The shared focus on the game allows you to almost detach emotionally; you lose yourself on the pitch, giving you the freedom to talk about whatever is on your mind.

“And this is what we wanted to capture with the film.”

Tom Day, Director at Outsider, said: “Like any Director, I thrive on set with cast and crew around me, but lockdown has forced us all to quickly adapt to new ways of working.

“I’m so proud of how the film looks despite not being in the room with Cyrus, Bland and Freddie.

“Although I’ve never met them in person we’ve bonded remotely and through necessity; which only strengthens the message of this project. We all made this film together.”

The film is scored by London grime artist, Yizzy, and his track Hustle Hard, which also appears on FIFA 20.