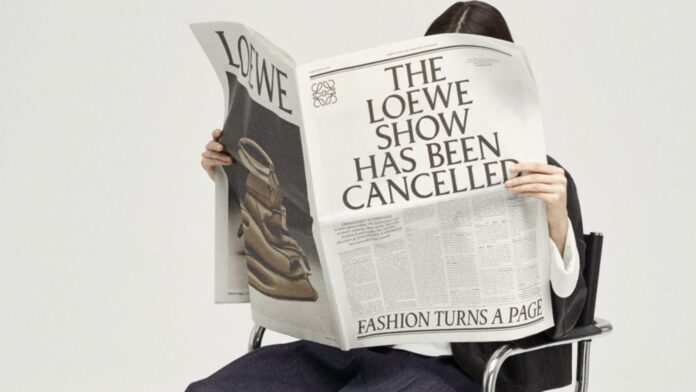 Spanish fashion brand LOEWE, under the creative direction of Jonathan Anderson, has created as stunning concept called ‘A Show in the News’, to showcase the brand’s Fall Winter 21 collection.

With major events around the world being cancelled due to the global coronavirus pandemic, the idea behind Loewe’s show was to reimagine  a fashion show in a striking and bold new format. We think it’s worked.

The collection is now being showcased via printed material, in a tangible and immersive format, as close to a physical fashion show as would be possible.

A newspaper supplement and accompanying article document the show that did not take place, centred around a character study by photographer Fumiko Imano, of the model Freja Beha Erichsen.

The design of the newspaper is executed by LOEWE and Jonathan Anderson’s frequent collaborators, Creative Directors M/M Paris, and will be sent out to subscribers of a range of broadsheet newspapers.

In keeping with a theme of ‘the big reveal’, the newspaper will also feature an exclusive preview of the first chapter from acclaimed and best-selling author Danielle Steel’s latest novel, The Affair.

This references Victorian literary traditions, when famous works from authors such as Charles Dickens and Alexandre Dumas were serialised in newspapers.

Readers are invited to assemble the book themselves, by folding the newspaper and cutting out the book pages.

Steel’s latest work, neither directly referenced nor referential to Jonathan Anderson or LOEWE, takes place in the fashion industry.

Jonathan Anderson has long admired Danielle Steel as a prolific icon, and someone who has encouraged multiple generations to enjoy reading.

Fiction and reality collide in fashion

The intention of ‘A Show In The News’ and the chapter preview, is to reach beyond a fashion-focused audience, by telling a story that collides fiction with reality and invites in a world of curious, interested readers.

A limited edition version of the newspaper will also be sent to guests who would have attended the runway show in person, including friends of the brand, select clients and press.

Housed in a personalised metal case, the box will contain an engraved paper knife enabling recipients to piece together the first section of The Affair, as well as a wood print by M/M Paris encased in an embossed leather piece.

With A Show in the News, LOEWE is once again reprising the metaphor of its previous fashion shows hosted during the pandemic, including the groundbreaking ‘Show in a Box’ and ‘Show on the Wall’.

The Fall Winter 21 collection itself will be available in stores from August.