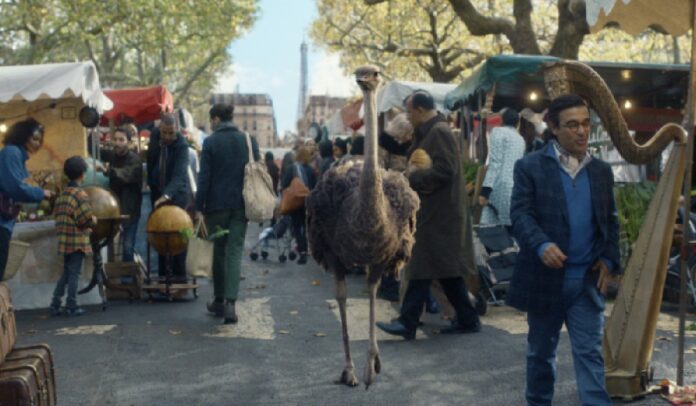 Eurostar has launched the next phase of its ‘You see more when you don’t fly’ campaign, featuring of all things, an ostrich.

The campaign is designed to showcase the benefits of travelling straight to the heart of European cities.

Moreover, it’s the first campaign from the cross-Channel rail operator since Britain left the European Union on 31 January.

Created by ENGINE, the latest instalment of the campaign sees the return of the Ostrich, a character first launched at the end of 2019 in print and digital formats but this time brought to life for TV and cinema audiences by Patrick Daughters at Gorgeous and the team at MPC.

The 30-second spots show the Ostrich making the most of the time gained by taking the Eurostar; visiting a punk exhibition at a gallery in London and ambling through a market in Paris, all while being able to look that little bit closer and linger that little bit longer thanks to time saved by arriving in the city centre.

“They are brought together in the new Eurostar TV campaign to demonstrate the joy of arriving in the centre of a European capital with your serenity intact, eager to get the most out of the weekend.

“The Ostrich was hatched by Richard Nott and David Dearlove at Engine and nurtured into maturity by Patrick Daughters’ direction and MPC’s sorcery.”

The campaign will run nationally across TV and Cinema in the UK and France throughout February and will launch later in the year across Belgium.

Richard Sherwood, Customer Engagement Director at Eurostar said: “The latest phase of our campaign reinforces the benefits of travelling by Eurostar – taking customers to the city centre which gives them more time to explore their destination.

“The new TVC’s have a bold and refreshing feel which reflects the challenger brand approach that’s part of our DNA.”

Alex Snookes, VFX Supervisor at MPC said: “Working on this project required a lot of meticulous planning and MPC’s involvement right from the very start.

“MPC worked closely with Patrick Daughters, David Dearlove and Richard Nott to offer our creative input, making sure the VFX was applied in the best possible way.

“The biggest challenge was bringing Patrick’s vision of the ostrich to life and giving it a fun and engaging character.

“Overall, it was a great collaborative process and a fun campaign to have been part of.”