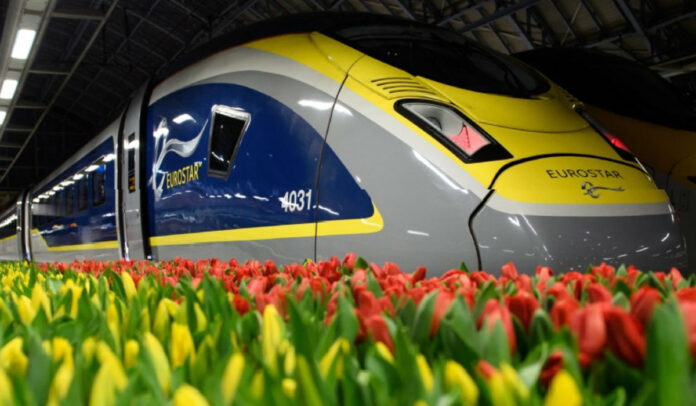 Eurostar has announced it will launch a direct service from Amsterdam to London on 30 April.

The company started running direct trains to the Netherlands in 2018. However, passengers returning to the UK were forced to change trains in Brussels to clear passport control.

From 30 April there will be up to two trains a day travelling direct from Amsterdam to London with stops in Rotterdam and Brussels.

The total journey time will take four hours and nine minutes. Tickets go on sale from 11 February and will start at £35 each way, Eurostar said.

Services will depart Amsterdam at 0748 Monday to Saturday and 1848 Sunday to Friday.

The company said it is working to introduce a third daily train and eventually a fourth. Direct services from Rotterdam to London will begin 18 May.

There are currently three outbound services a day from the UK to the Netherlands.

The inaugural service left Amsterdam Centraal this morning (4 Feb) at 07:48, with Cora Van Nieuwenhuizen, Minister of Infrastructure and Water Management and Ankie Broekers-Knol, Secretary of State for Security and Justice in the Netherlands, at the station to mark the departure of the first direct Eurostar train from the centre of Amsterdam to the heart of London.

The service arrived just over four hours later at St Pancras International. It was welcomed by Grant Shapps, Secretary of State for Transport in the UK.

“We’re continuing to invest in modern, efficient transport links with the continent so our businesses and tourism industry can flourish”, Shapps said.

‘The days of passengers being forced to decamp from the train at Brussels to file through passport control will soon be over, as we look forward to direct, return, high-speed services to Amsterdam and beyond.”

Mike Cooper, Chief Executive, Eurostar, said: “Our services from the UK to the Netherlands have proved very popular with over half a million travellers since launch.

“Our fully direct service marks an exciting advance for high-speed rail and provides consumers with a comfortable, environmentally friendly alternative to the airlines on one of Europe’s busiest leisure and business routes.”

Cora van Nieuwenhuizen, Minister of Infrastructure and Water Management in the Netherlands, said: “The direct connection makes the train journey to London easier and faster. Checks in Brussels will no longer be necessary, saving travellers an hour of travel time.

“This way the train really becomes a fully-fledged alternative to the plane.”

Roger van Boxtel, CEO of Dutch rail firm NS, said: “Brexit or not, London will be closer from 30 April. Eurostar will take travellers from the centre of Amsterdam to the heart of London in four hours.

“The international services to Brussels and Paris are already a success. From today we can now add London: the sustainable train is the future and brings Europeans together.”

Eurostar claims to offer the most sustainable choice for short-haul European travel. A journey between London and Amsterdam results in 80% less carbon per passenger than the equivalent flight.

By choosing Eurostar, customers are also actively supporting the reforestation of woodland in Europe with a tree planted for every service that it operates across its routes.

You could also fly though: