New research claims that Not-for-Profit organisations have seen vastly improved email metrics throughout the pandemic – as have utilities companies.

The research in the Email Benchmarking Report 2021’ was carried out by the Data & Marketing Association (DMA) and Validity, and published today.

According to the research, the best performing sector for click rates was Not-for-Profit, which is up to 6.9% – the highest recorded value since the study began.

This impressive increase from last year’s figure (3%) could be explained by many people feeling the need to contribute and make someone else’s life better – especially charities connected with the medical and social support systems who have registered a high level of engagement.

In terms of open rates, the Not-for-Profit sector also saw the highest returns this year with 26.1% – up 5% from last year.

“Two sectors have particularly stood out this year in our Email Benchmarking Report – Not-for-Profit and Utilities. Both have over performed”, said Tim Bond, Director of Insight at the DMA.

“In the first instance, it’s easy to hypothesise that an increased sense of compassion and altruism brought people to engage with charities to either volunteer their time or donate money to support others in need”.

“In the second case, Utilities’ positive performance is possibly a reflection of the increased awareness of customers who had to spend more time in the home, consequently developing the need to find more convenient deals to manage their house expenses.”

“Correctly used, email metrics form part of a virtuous circle of improvement. Over the past year, we have seen responsible businesses gauging their subscribers’ changing digital body language, and then adapting their strategies to deliver continued relevance and value.”

As can be seen in the chart below, the email click rates for each sector listed have all seen positive increases over the past year, especially Not-for-Profit. 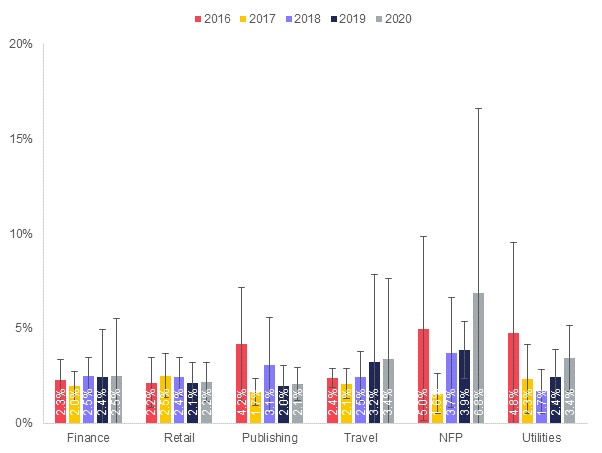 After increases over the last two years, email metrics overall have seen a slight decrease this year.

Although, in a year that saw the coronavirus change the way the entire planet lives, works, shops and plays, it’s no surprise that email’s benchmarks have been impacted.

In fact, 2020 saw ‘emails sent’ volumes at their highest compared to previous years of this research – up 17% year-on-year.

Despite this, the average delivery rate only decreased slightly (to 97.9%), as did click and click-to-open rates (2.3% and 10.7% respectively), momentarily breaking the long-term positive trend seen over the last five years of figures.

Open rates also saw a slight reduction for the second year (19.2% compared to the 20% we registered in 2019), but this remains above figures from 2017 and years prior.

Bond said: “While this year metrics appear to show a year-on-year decline, it’s reassuring to see the overall increase of nearly a fifth for total send volumes.

“The results in this report should be read against that context. Indeed, data shows a significant uplift in total opens and total clicks – a success that validates the increased importance of email as a key channel, especially during the pandemic.”

The DMA will launch this year’s report during an upcoming webinar on Tuesday 20 July 4pm BST, sponsored by Validity.

Based on reported data from a cross-section of major email service providers, it provides a definitive yardstick for these KPIs, showing year-on-year variances, split out by B2B vs B2C, as well as major industry sectors.