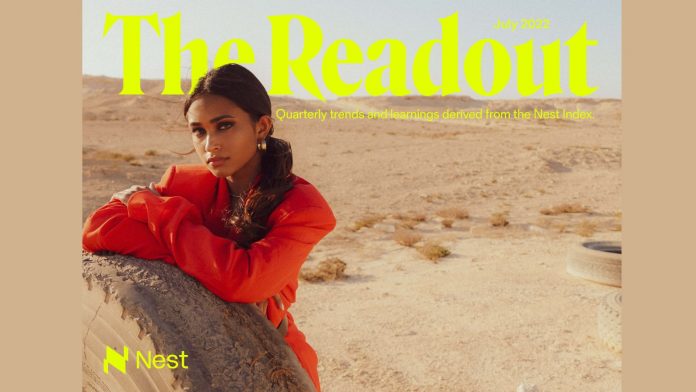 This is a key finding from a new report by Nest Commerce, taken from global Meta data from more than 40+ ecommerce brands, 70% prospecting campaigns generating a total of 914 million impressions across Q2.

The data reveals there has been a small reduction in Cost Per Thousand (CPM) in May and a sharp drop in June.

This is likely the result of some brands pulling back from the auction due to budget cuts driven by the economic slowdown.

The result of this 12% decrease in CPM, as well as a 4% increase in Conversion Rate (CVR), is cheaper traffic and subsequently Cost per acquisition (CPA). The higher conversion rate suggests consumer demand remains stable.

The data shows a slight reduction in AOV, (Average Order Value) but this is counterbalanced by a greater decrease in competition and increase in conversion rates.

This indicates that consumer demand has softened by a smaller degree than Meta costs have fallen. In other words, appetite is higher but average basket sizes are down.

Creative is most significant optimisation lever

The research also reveals that privacy initiatives are impacting the ecommerce landscape with creative replacing segmentation as the most significant optimisation lever for brands on paid social.

The Next Index report reveals the clear impact of signal noise due to privacy initiatives, like iOS 14 and the European Cookie Directive. Broad audiences are now driving significantly lower-cost traffic than interest or lookalike audiences.

There is now 29% lower Cost Per Click (CPC) than interest and 48% lower than lookalike.
Meanwhile in Q2, static ads delivered a 34% higher CTR and 39% higher CVR than video ads.

Creative is especially important when advertising to broad audiences and highlights the efficiency of static creative to drive performance despite current trends toward short-form video.

The report also reveals that ‘Sale’ messaging continued to deliver the best ROAS (Return on Ad Spend), which as a trend is likely to continue as purse strings are tightened. In second place was ‘quality’, which unsurprisingly leads to a much higher AOV.

Advertising longevity will be important in justifying purchases in the current economic landscape.

Despite lower CTR and ROAS, ‘sustainability’ messaging drove the highest CVR, suggesting that this messaging encourages eco-conscious customers to make a purchase.

According to Will Ashton, CEO, Nest Commerce, said: “The new report highlights the growing change in the digital marketing landscape and the need for a new approach respecting privacy while attracting an audience to your brand.

“Creative remains the most significant optimisation lever for performance on paid social. Brands no longer have to focus as much on audience segmentation.”

“With economic pressures on many brands, it is more important to be as efficient as possible, and that means having the right strategy in place.

“The lower platform costs right now offer an opportunity for brands to ensure their creative is delivering and to test concepts over the summer before costs rise.”