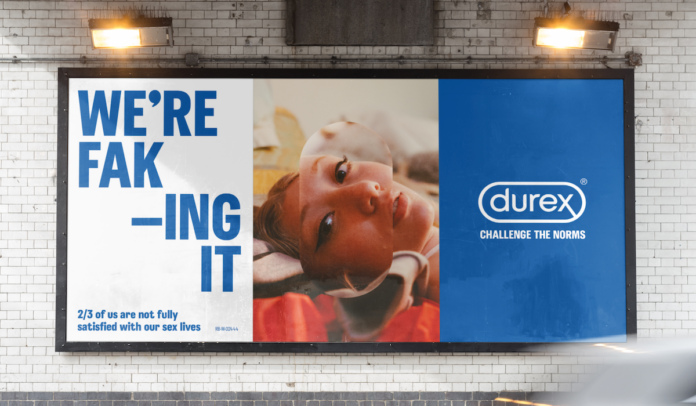 Devised by Durex’s global creative agency Havas London, it marks a significant development in its marketing strategy; one that will see the 91-year-old brand challenge the unrepresentative and damaging sexual conventions prevalent throughout society.

By challenging rather than enforcing society’s sexual conventions, it hopes to stimulate healthy conversation and normalise good sex for all, whatever that happens to look like.

The relaunch has been informed by Durex’s 2017 Global Sex Survey, which paints a picture of a sexual landscape in flux.

While the exponential growth of the internet has brought positives including openness, discussion, exploration and access, its consequences, including misconnection, myths, lack of education and confusion, are substantial.

Ultimately, the findings pointed to an underlying sexual anxiousness, driven primarily by unrealistic representations of sex throughout culture.

It is those unrealistic representations – as well as the stigma and taboos they exacerbate – that Durex is rallying against.

This launch date – the occasion on which these conventions are felt most strongly – was chosen specifically, and one of the myths Durex aims to bust is that good sex can only happen on special occasions.

The launch itself centres around an inclusive open letter to all:

What if this Valentine’s we challenge sexual norms.

‘Cause let’s be honest, why do we conform?

Behind the messages of love and sex,

Sometimes it’s not as good as we expect.

We’re all under pressure,

And enough is enough.

So what if we take a stand for sex?

Worry less about how it ‘should’ look. Celebrate how it can feel.

Where porn’s not the norm.
And STDs are kinda real.

From the first time, to ‘no, not this time’.

Throw out definitions and let go of traditions.

Love is love, no matter orientation.
Isn’t it time we challenge sexpectations?

Elliot Harris, RB Global Executive Creative Director at Havas, said: “This might be the most important piece of work we ever do. Durex is a huge brand with a unique and vital role in culture.

“It has genuine influence, and the capability to enact real change. And make no mistake, this is a proper commitment.

“This new brand purpose will lead to healthier conversations around, and attitudes towards, sex; but also greater inclusion and acceptance for those who might not always experience it.

“To have a brand like Durex publicly and proudly on your side makes a difference.”