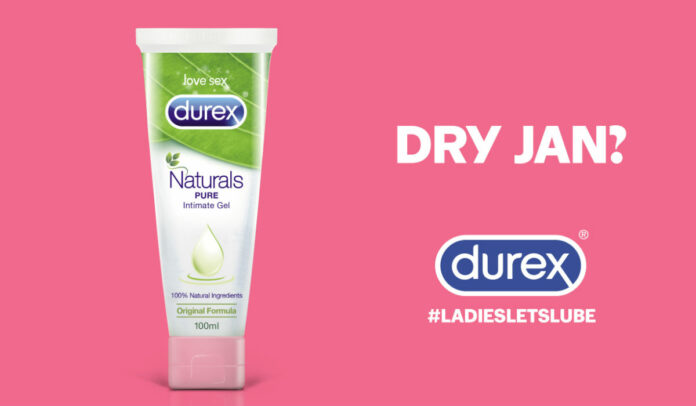 This month, creative agency Havas has reprised the Durex Ladies, Let’s Lube campaign with a cheeky nod to everyone whose January is a bit, erm, drier than expected.

The tactical press, social and OOH ad injects some double entendre into the concept of Dry January, as the question ‘Dry Jan?’ is answered simply with a bottle of Durex Naturals Intimate Gel and a call to action: Ladies, Let’s Lube.

It marks a light-hearted follow up to last year’s TV ad, a playfully knowing, fourth wall-breaking film from Fleabag and Killing Eve director Harry Bradbeer, which aimed to de-stigmatise female sexual discomfort and unlock better sex for everyone.

Discomfort during sex is a familiar feeling for many women, but few talk about it and less than 50% actually do something about it.

That means that more than half of women are putting up with uncomfortable sex – despite the fact that women naturally feel a bit drier down there for two-thirds of their cycle.

In fact, nine out of ten women who use lube say that sex feels better – and, as the Ladies, Let’s Lube campaign points out, it’s totally natural to reach for the lube on those drier days.

Kate Lloyd, creative at Havas London said: “As part of Durex’s ongoing mission to normalise lube and help end uncomfortable sex, we thought we’d encourage people to get over any New Year blues with a little lube.

“While millions of Britons sign up to dry January, we want to remind them that sometimes it’s better to be wetter.”

We Are Social creates 2020 ‘horoscopes’ for top brands