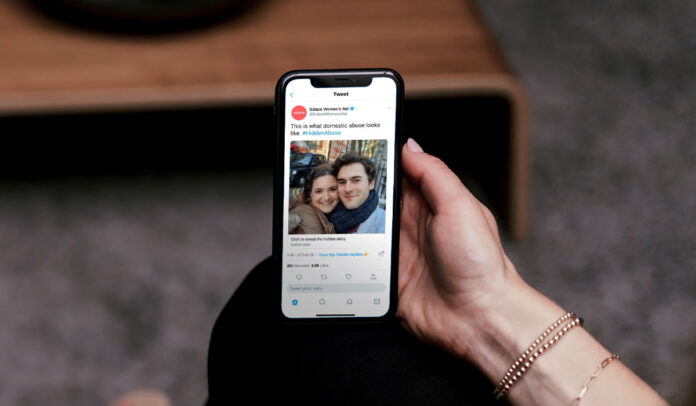 Solace Women’s Aid is raising awareness around Hidden Abuse, offering help and support to those it’s happening to – through a groundbreaking Twitter campaign.

The charity said it takes around six and a half years for a woman to leave an abusive relationship.

Controlling and coercive behaviour; cutting people off from their friends and family; and making them feel afraid and belittled are all forms of domestic abuse.

But because the violence isn’t obvious or ‘seen’, it can often be ignored and even normalised.

The campaign comes with the #HiddenAbuse hashtag.

To demonstrate the hidden story behind domestic abuse, Twitter users will see a Tweet from @SolaceWomensAid that will show a photo of a seemingly happy couple accompanied by the contrasting phrase: “This is what domestic abuse looks like.”

Intrigued users will then be challenged to find the hidden story; discovering the true reality behind the picture by clicking into the Tweet and on the ‘hidden replies’ button.

The feature will then reveal a video that plays out the controlling and abusive conversation between the couple; revealing a very different story to the happy selfie.

Anyone who views the film is then encouraged to share the revealing journey with their followers.

The campaign was devised by customer acquisition agency STACK, in collaboration with Solace Women’s Aid and Twitter.

“Hidden abuse can take many forms; from controlling somebody’s actions, to alienating someone from their family and friends, to creating an environment of fear and suffering.

“But some people don’t realise hidden abuse is actually a type of domestic abuse. We believe every woman has the right to a life free from abuse and violence.

“A pattern of emotional abuse and controlling behaviours is at the heart of domestic abuse and the effects can be far reaching and extremely traumatic.

“We also know, from working with 1,000s of survivors, that these very behaviours are so often the precursor for escalating violence and even homicide.

“We need to reach more women sooner, so they can be safe from abuse and fear and rebuild their lives.

“The purpose of the #HiddenAbuse campaign is to remind people that just because you can’t see domestic abuse doesn’t mean it’s not happening.

“The Hidden Replies feature on Twitter has allowed us to tell an engaging story; one that is based on real-life experiences we hear about everyday and to raise awareness around hidden domestic abuse.

“We hope people get behind the campaign, Retweet it far and wide and help to continue to open up the conversation around hidden abuse.”

Victims of domestic abuse seeking help or advice are encouraged to visit: https://www.solacewomensaid.org/hidden-abuse