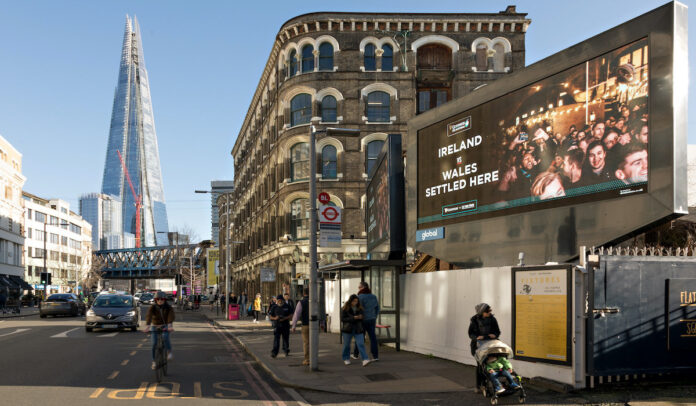 Diageo has kicked off its digital, multi-trigger dynamic out of home campaign for the Guinness Six Nations 2020.

As tensions rise and the competition heats up in this year’s rugby event, the championship’s title partner has rolled out a nationwide digital dynamic out-of-home campaign.

The aim is to encourage fans to “settle in” to match venues, pubs, bars or at home with a Guinness.

Devised by Carat and Posterscope, the campaign seeks to capture the attention of Guinness Six Nations fans and championship “flirts”; and direct them to pubs or stores where they can catch a live match or grab a pack of Guinness.

It will appear across more than 1,600 digital sites across the country; and features multiple different triggers and dynamic creative executions, based on location and the time of the week, Diageo said.

Screens near to pubs showing matches are automatically served ads featuring directional messaging to the nearest venue, as a match approaches.

POS screens close to major off-trade retailers feature two different creative executions – a countdown to match kick off from the day before and a grab a pack message.

Screens at rail stations and panels in the vicinity of key stadiums, Twickenham, BT Murrayfield and Principality, will show match information and a countdown to each stadium’s next game.

Match fixtures and countdown creatives, with tailored local messaging, will also be served to digital and large format sites at five large third spaces including Flat Iron Square in London.

The dynamic campaign, which is part of a larger OOH campaign also featuring non-dynamic digital and traditional sites, runs throughout the championship until 16 March 2020.

Creative is by AMV BBDO & Geometry.

Anna Sablovscaia, Guinness Senior Brand Manager, said: “Guinness is one of the world’s biggest rugby supporters and we wanted a campaign that would celebrate our position as the title partner of the Guinness Six Nations 2020, but also help fans and flirts experience and enjoy the tournament wherever they are in the UK.

“With its ability to serve specific messaging to the right people, at the right time and in the right location, out of home had to be on the media plan.”

David Eyre at Carat added: “This campaign is huge, not just in terms of its scale across the UK, but also in terms of its complexity; serving a multitude of tailored creative executions to multiple different locations at specific times.

“Out of home is the only medium that combines high impact, brand-led messaging alongside localised, directional ads that drive footfall and sales to both on and off trade venues.”

Catherine O’Leary, Planning and Buying Director at Posterscope, said: “We’ve used our location-marketing expertise to create a nationwide OOH campaign to reach supporters across the nation throughout the championship.

“Using dynamic content served from our in-house dynamic ad-serving application Liveposter, we are creating a real time conversation with championship fans and flirts before, during and after the matches; thus making sure Guinness is always relevant to the action and with the supporters every step of the way.”