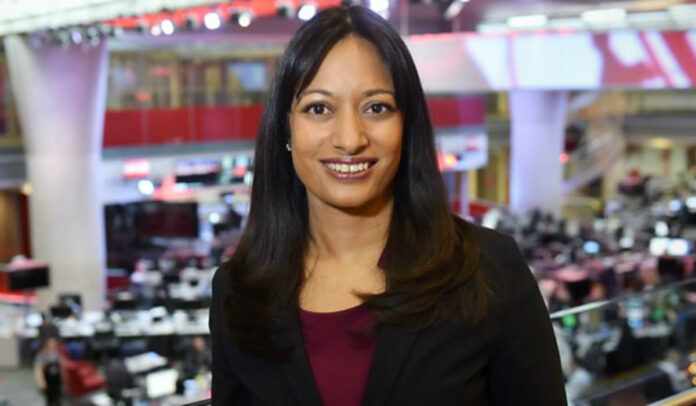 The BBC has appointed Dharshini David as its new Global Trade Correspondent.

The broadcaster said the newly created role will enhance coverage at a time when trade is making headlines every day.

From the changing world order to Brexit and the environment, trade is having a major impact on people’s lives.

Dharshini David to ‘join the dots’

As Global Trade Correspondent, Dharshini will join the dots, the BBC said, explaining what is happening and why.

She’ll provide a global perspective for international and domestic audiences, contributing to BBC News output across television, radio and online.

She has interviewed many key global figures – from Prime Ministers to central bank governors and FTSE 100 CEOs.

“I’m thrilled to be taking on this hugely important role at the BBC at a crucial time” Dharshini said.

“International trade can be dismissed as dry and complex, but globalisation has shaped all our fortunes – for better or worse – in recent years.

“The new decade is going to be defined by radical changes in trading relationships.

“I’m looking forward to working with my BBC colleagues to strip away the spin and speculation, to explain to our audiences what lies in store – and exactly what this means for them.”

Head of BBC Newsgathering, Jonathan Munro, said: “Dharshini has exceptional credentials for this job which we’ve created to provide a global perspective on trade for our international and domestic audiences.

“As well as being a first class journalist, Dharshini has advised the boards of some of the UK’s biggest companies and written a best-selling book on international economics.

“She will bring insight, verve and energy to one of the defining stories of the 2020s.”

Dharshini graduated from Cambridge with an MA in economics. She started her career as a government economist before moving to HSBC Investment Bank as Senior UK Economist.

Dharshini left the trading floor to join the BBC, presenting for Panorama. She also headed up the BBC’s Wall Street coverage from New York – just as the financial crisis took hold in 2007.

She also worked at Sky News, where she presented business, political and news programmes. This included the flagship ‘Sky News Tonight’ show.