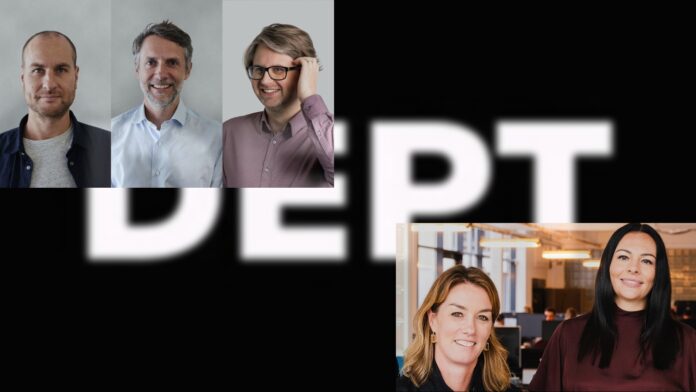 International digital agency Dept has announced a new structure to its regional leadership and named its first two senior hires in the US.

In addition to the introduction of a new regional c-level, Dept has created Global SVP roles to unite and drive the agency’s services across all of its operating markets.

In the UK, Jamie Kenny and Alex Miller, the co-founders of Byte (part of Dept) which joined Dept in February 2021, will step into the roles of Global SVPs of Creative & Content.

Jonathan Whiteside, co-founder of Building Blocks which joined Dept in 2016, will move from his role as Principal Technology Consultant into Global SVP of Technology & Engineering, together with Jesse Streb, co-founder of Rocket Insights (part of Dept) in the US.

“We have rapidly grown over the past few years and welcomed some pioneering agency founders and leaders to Dept,” said Dimi Albers, CEO, Dept.

“By placing these people into Global SVP roles aligned to our core pillars of creativity, technology and data, we will accelerate our global service lines, instill excellence across everything we do, and grow the next generation of digital leaders.”

Dept has grown from 120 people in the Netherlands in 2016 to over 2,000 digital marketing, data, creative and technology experts working together across fifteen countries today.

The agency has grown by 50% each year, and expanded into new markets across Europe and the Americas.

Dept’s new leadership, all of whom are current team members stepping into expanded roles, will be crucial in facilitating the growth that is expected over the coming years and the move toward one unified, global brand.

Dept also announced the appointments of its first US global leadership roles in the form of Amanda Schmidt as Chief People Officer and Missy Foristall as Chief Operations Officer.

Schmidt joins from WPP/Group M’s Essence, where she was Global Chief People Officer.

Foristall was previously Vice President at IBM within its Digital, Marketing and Technology groups.

“We’re growing rapidly – 50 percent year over year – and as we continue our expansion in the United States, we need strong global leadership to scale our people, culture and operations.

“Amanda and Missy each bring a wealth of experience and share the same commitment and excitement to bring Dept to the next level,” said CEO Albers.

At Essence, where she most recently served as Global Chief People Officer, Schmidt played a critical role in helping the agency scale globally, quadrupling in size during her five years there.