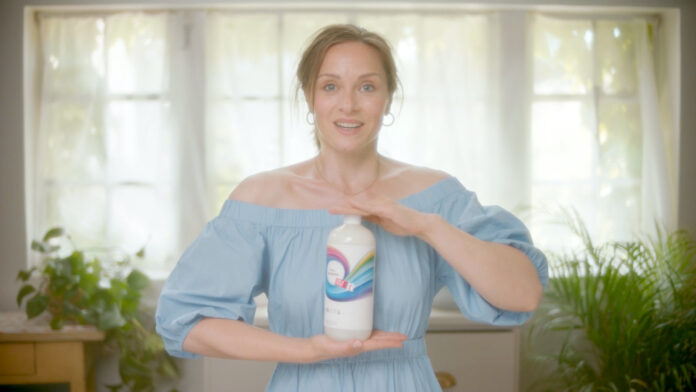 Delphine Depardieu stars in a new ad showing how fed up French consumers are with brands being insincere.

Instead, forward thinking brands should commit to solid initiatives for sincere and lasting progress and communicate them effectively.

These are the results of a study called Next Leading Brands, carried out by BVA for Paris advertising agency Babel.

The study in May 2021 of 1,002 people aged 18 and over revealed that “3 out of 5 French people are sceptical about the sincerity of brands’ messages claiming commitments to a cause.”

Acknowledging that gentle humour is a surefire way to drive a point home while entertaining people at the same time, Emma + Elliot’s 90-second Full Washing parody ad came to life.

Avoiding being a caricature of fake laundry detergent ads of the past, the script called for an accomplished performer to credibly deliver the Full Washing pitch while on the verge of a nervous breakdown.

Emma said: “Casting was key to the success of this film. The character required a touch of madness, something that goes off the rails to emphasise that this ‘washing’ thing is superficial, it cannot work in depth if brands are not sincere.”

“Delphine was the unanimous choice for Babel and us,” added Elliot. “We loved the richness and subtlety of her playing.

“She has that Bree Van de Kamp, Desperate Housewives side that we were looking for: a good housewife in all respects, but there is a hint of madness in the eyes that makes us laugh.”

“Before it wasn’t so easy to deal with all these brands,” Depardieu’s character confides.

“With Greenwashing, Women Washing, Pinkwashing, Wokewashing and all the others, it hasn’t been easy to choose. Now, with Full Washing, we have the first brand with all these messages in one.”

A red logo on a white t-shirt has been completely erased after using Full Washing and in a shaky voice, she tells us how good the results are: “Mmmm, fake smells sooo good”.

The  spot closes with the strapline “What brand will you be tomorrow?”