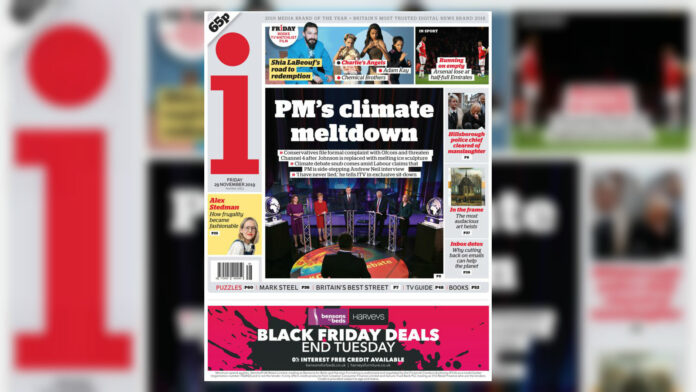 The owner of the Daily Mail newspaper has announced that it intends to buy rival the “i” newspaper in a deal valued at £49.6m.

DMGT said its Consumer Media business has acquired the ‘i’, the UK national newspaper and website, from JPI Media Limited for £49.6m.

The ‘i’ has an established reputation for quality journalism with retail sales of approximately 170,000 newspapers each weekday and over 190,000 copies of the iweekend each Saturday.

The deal is dependent on clearance by the UK Competition and Markets Authority.

Lord Rothermere, Chairman of DMGT, commented: “We are delighted to welcome the ‘i’ to our stable of media brands. It is a highly respected publication with a loyal and engaged readership.

“We are committed to preserving its distinctive, high quality and politically independent editorial style.

Labour leader Jeremy Corbyn was clearly unimpressed by news of the deal, taking to Twitter to remind voters that billionaires were seizing control of British newspapers.

“The billionaire owner of the Daily Mail, the Viscount Rothermere, has bought @theipaper”, he wrote on his Twitter page.

“Two billionaire press barons now own half of the top 10 daily newspapers.

“Remember this when they attack Labour’s plan to make the super-rich pay their fair share.”

The billionaire owner of the Daily Mail, the Viscount Rothermere, has bought @theipaper.

Two billionaire press barons now own half of the top 10 daily newspapers.

Remember this when they attack Labour's plan to make the super-rich pay their fair share.

Undaunted, Lord Rothermere added that the deal was strategically important: “The acquisition of the ‘i’ is both strategically and financially compelling for DMGT and there is scope for potential synergies in the future, notably from dmg media’s existing infrastructure and in advertising sales.

“The business will benefit from DMGT’s long-term approach and commitment to investing in editorial content.

“Financially, the ‘i’ will be a strong cash generator for the Group as we continue to invest across the portfolio, both organically and through acquisitions.”