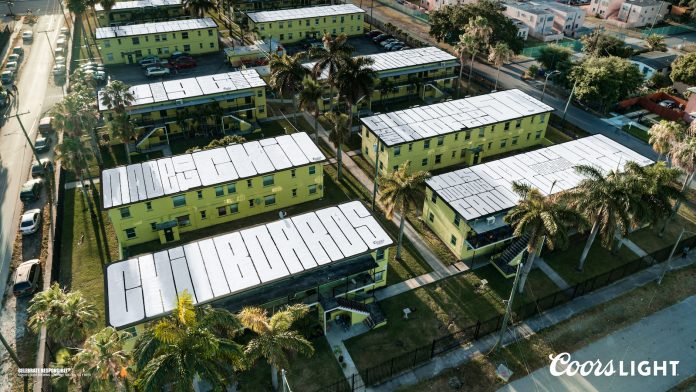 Global beer brand Coors Light has put the need to act on climate change at the heart of its latest ‘Chillboards’ campaign.

The ‘Chillboards’ rooftop billboard installations, it said, are proven to cool buildings down.

The minimally branded rooftop installations are located atop apartment buildings in Miami and painted with Mule-Hide Finish reflective white roof coating, a formula proven to reflect 85% of sunlight.

On one rooftop tested, Coors Light discovered the ad lowered the surface temperature of the roof by as much as 50 degrees. you can see how it works in the video below.

The campaign couldn’t be more timely. Globally, 2021 was ranked the fifth warmest year on record since 1880.

Heat waves are more frequent, and in Miami, there have been more 90-degree days than ever before. Air conditioners are humming non-stop, utility bills are skyrocketing, and overall, everyone is just hotter.

“We realise not everyone will be able to paint their roofs white, but we hope to inspire Americans to make choices that reduce energy usage and puts a few dollars back in their pockets.”

The new rooftop Coors Light ads, which have different phrases like, “Chillboards” and “Ads Nobody Can See, But Everyone Can Feel,” are written in the typeface “coolest,” designed to cover more than 95% of the surface space in reflective white paint.

“Simple and cost-friendly initiatives like Coors Light Chillboards can have a significant impact on the quality of life for renters and homeowners,” said Jane Gilbert, Miami-Dade Chief Heat Officer.

“If more communities started seeing the value of painting roofs white, we could cool down millions worldwide.”

In support of the program, Coors Light is giving away 5,000 gallons of roof coating.

Creative agency on the initiative was Adam&EveDDB.

In March, Coors Light spearheaded efforts for Molson Coors to move away from six-pack plastic rings by the end of 2025, a move that will eliminate 400,000 pounds of single-use plastic annually.

You can learn more about Coors Light’s sustainability agenda here.