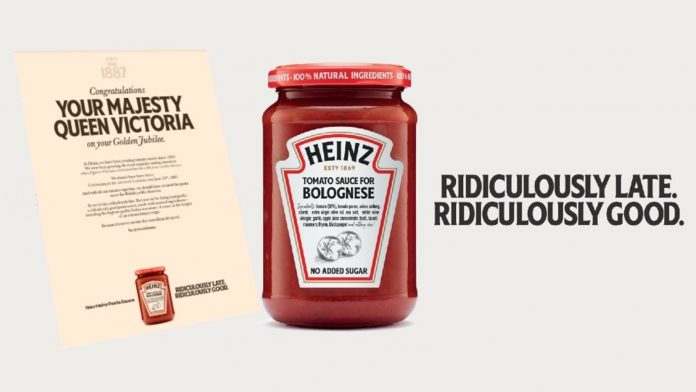 Building on the successful launch of its “Ridiculously late, ridiculously good” campaign, Heinz ran a new full-page colour press ad in over the weekend to congratulate HM Queen Victoria for her Golden Jubilee, which took place in June 1887 – 135 years ago.

Kraft Heinz launched its new Tomato Pasta Sauces two months ago with a witty print campaign, also by Wunderman Thompson Spain, recognising how ridiculous it is that Heinz – which has been selling sauces and growing tomatoes for around 150 years –  has not produced a pasta sauce until now.

Since the original executions went live, the range of seven different tomato sauces has become one of the most successful launches in the category over the last five years in the UK.

The press and poster ads apologised for being 150 years late to the party.

Heinz Tomato Pasta Sauces have already delivered an astonishing 80% incremental growth to the category in some of the first retailers to sell the range.

Jose María Piera, CEO at Wunderman Thompson Spain, said: “Our ‘Ridiculously Late. Ridiculously Good’ campaign isn’t just a campaign to launch the new Heinz pasta sauce. It’s also a communications platform that’s opened up infinite possibilities for us to generate connection, likeability, and talkability – something that’s been clear from the beginning from the ambitious team at Heinz.

“It demands maximum agility from all of the players involved in the process, from creation, client, and PR, to allow us to react to key cultural moments in ‘Ridiculously late’ fashion, just as we’ve done here to celebrate the Jubilee, but not the one you think…”