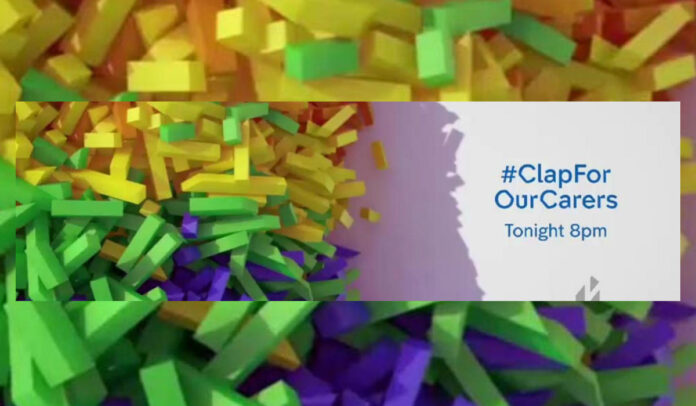 Frontline healthcare staff who feature in Channel 4’s 24 Hours in A&E will today be heard on Channel 4’s airwaves as continuity announcers.

They will address the British public directly to say ‘Thanks from the frontline’ for staying at home.

We think this is a brilliant idea, and one that all channels should consider.

Familiar key workers at St Georges Hospital in London will join in with the Channel 4 continuity. They include consultants Dr Rhys and Dr Ahmed, and nurses Chris Kirby, Georgina Day, Sophie Parsons and Vicky Mummery.

They will tell viewers: “You might recognise me from 24 Hours in A&E.

“Things are challenging here but we want to thank you for your support and in particular, for staying at home.

“Please keep going, it is making all the difference.”

Bespoke, rainbow #clapforourcarers idents, accompanied by the voice over recordings from the key workers will be shown intermittently throughout the day (11 in total) on Channel 4. The first one is at 08:35am; the final one goes out into the news at 7pm, which covers the 8pm clap itself.

“By hearing directly from some key workers who our viewers will recognise, we hope this campaign will amplify the sense of togetherness between frontline workers and the general public, and the impact we can all have by staying at home”, Zaid Al-Qassab, Chief Marketing Officer, Channel 4 said.

The initiative forms part of the broadcaster’s wider #StayAtHome activity. This was created to amplify the important public health message to Stay Home, Save Lives.

This also includes a series of fly-on-the-wall style films, self-shot by a host of well-known Channel 4 faces. They’ll reveal the mundane tasks going on at home during lockdown; the on-screen ‘StayAtHome’ graphic across Channel 4, E4, More4 and 4Seven that has been seen by almost two thirds of the population; and a special #ClapForOurCarers ad break takeover that saw 39 advertisers join together to thank the NHS and join in with the national moment.