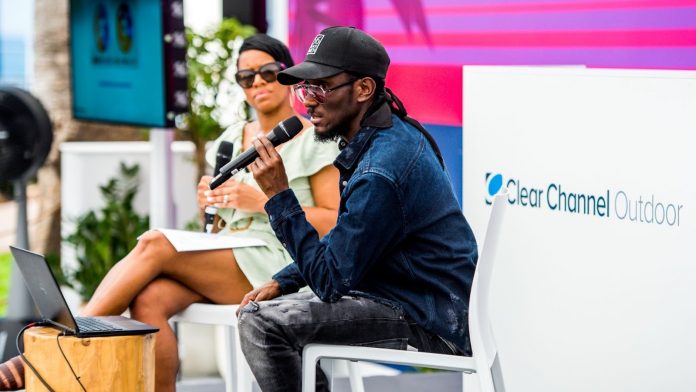 Cephas Williams, Founder of the Black British Network, and Clear Channel joined forces once again, this time to send a message to the entire advertising and media industry ahead of the annual Cannes Lions Festival.

The campaign supported by one of the leading OOH media companies in the industry, launched on Clear Channel’s digital screens in support of Williams’ mission to take as many black creatives to the largest global ad industry event this summer, Cannes Lions festival.

Cephas Williams is currently raising money to take as many black creatives to Cannes Lions Festival 2022 who wouldn’t ordinarily have the access or opportunity to do so.

Williams said he wants to help diversify forums such as this by increasing the representation, visibility and access for black people at events across the media and advertising landscape.

This initiative goes beyond just inviting black people to Cannes, it aims to enhance their experience by having them feel connected, included and benefit from an ecosystem of support and relationships that they can build over time.

In 2019 Williams was invited to Cannes by Clear Channel following their work together throughout the globally recognised 56 Black Men campaign.

“When I was in Cannes Lions 2019, I genuinely felt like the odd one out”, Williams said.

“As much as I appreciate efforts to try and make forums like Cannes more inclusive, it’s going to take people like myself taking action to help drive change in this space”.

The world has since been adjusting and growing from all things Covid and the awakening that came after the murder of George Floyd in 2020.

As the Cannes Lions festival returns for its first live event two years on from these global events, Williams’ is now in a position to give back and give others the opportunity to experience Cannes Lions for themselves.

Williams said: “I may not have much, but with what I do have I want to give back and pay it forward.”

He has already put down £10,000 of his own money to support his mission to take at least three black creatives alongside his team.

“Cephas and I speak regularly and I value his wise counsel – he has taught me that to say nothing is not an option and that positive action – no matter how small, is a step in the right direction to support the black community.

“Talon is very proud to support Cephas and together with some amazing OOH media partners, we will continue to ensure his message is spread to the widest audience possible to drive the desired effect of delivering impact, action and change.”

Cephas Williams will be in conversation with Barry Cupples at the LBB beach while out in Cannes this year.

Lucky Generals, a founding member of the Black British Network, have signed up and contributed £4,500 to the Crowdfunder.

“A lot of this year’s winners will no doubt have a diverse theme or draw directly from black culture so it’s a travesty that awards audiences don’t usually reflect this”, Brooke-Taylor said.

“Cephas’ mission to take as many black creatives to Cannes as possible is a brilliant way to start to redress this imbalance.”

“I’m proud to support Cephas on his mission to raise visibility and to make changes around inclusivity in the creative space” Elba said.

“The industry needs more voices that reflect the culture and what society looks like today. This can only happen by creating more opportunity and making sure there’s a seat at the table for everyone.”

Soho House has also announced its support of Williams’ initiative. The member’s club has given £5,200 to the project and will be offering the three black creatives membership.

“His work to drive better representation for black creatives is inspiring, we’re proud to support the campaign and to have the three shortlisted creatives as part of our membership”.

The black creatives will receive an all-expenses-paid trip to Cannes Lions 2022, including accommodation, travel, festival passes and £250 spending money in addition to their membership to Soho House.

Williams, who speaks fondly of the leadership at Clear Channel believes that with great leadership, conversations such as these are much more effective to navigate internally.

William Eccleshare,  Executive Vice Chairman of Clear Channel Outdoor Holdings, stated: “Cephas is an inspiring driver of changing attitudes and his beautiful ‘Letter to Zion’ demonstrates his special combination of empathy and passion.

“I’m personally proud to be an ally and supporter.”

Caroline Forbes, friend of Williams and Head of Sales – Out of Home Agencies at Clear Channel, said: “Cannes was a pivotal experience in my career for a number of reasons.

“My involvement in 2019 was a result of the work we’d been doing with Cephas on his 56 Black Men Out of Home campaign.

“Our partnership has fundamentally changed the way we talk about race and our support of the 56 Black Men/ ‘I am not my stereotype’ campaign evoked honest and meaningful discussions within the business.

“Our subsequent involvement in Let’s Not Forget, Letter to Zion and the Black British Network triggered a kind of ‘social awakening’ across the organisation.

“As a black woman, I’ve been acutely aware of the lack of diversity in the industry, a situation that continues to manifest itself in Cannes.

“Whilst I have to say it didn’t negatively impact my own experience, I do know that I benefited from a fabulous and naturally inclusive support of my senior Clear Channel colleagues.”