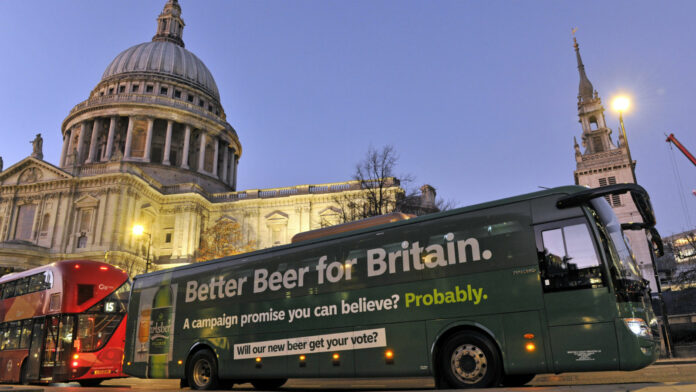 As election chaos takes over the minds of Brits, Carlsberg has launched a trade deal campaign which Brits can really get behind – free beer in exchange for belief in the brand’s latest brew.

The Danish brewer has been stopping off at political party HQ’s in a bid to get all parties to agree in one policy  – “Brewing for a Better Tomorrow” with key policies to include Better Beer for Britain and a focus on sustainability.

Each political party will be promised “Beers for the many, not the few” (Labour), “Unleashing Britain’s Brewing Potential”  (Conservative) and a “Plan for Britain’s Snap Pack Future” (Liberal Democrats).

A touring Carlsberg Battle Bus will be pulling up in London throughout election week, offering FREE BEER to voters and non-voters alike

The campaign for “Better Beer for Britain” comes following Carlsberg’s revamp of its flagship beer in the UK, following a bold admission that despite its famous strapline, its previous lager was ‘Probably NOT the best beer in the world’.

The Carlsberg Battle Bus will be pulling up across the capital on Tuesday 10 December and Wednesday 11 December to deliver on the campaign promise in the form of a can of, probably, the most balanced pilsner in the world.

First arriving at Kings Cross on Tuesday 10 December, the Carlsberg Battle Bus will move to Charing Cross on Wednesday 11 December and offer adults over the age of 18 one free sample of their new Danish Pilsner.

Carlsberg will not be looking to debate over its brew after successfully completing its mission to revamp every aspect of its beer.

The end-result is a perfectly-balanced 3.8% ABV Danish Pilsner, which has been ‘rebrewed from head to hop’ to deliver a crisper, fuller flavour than its predecessor.

Early opinion polls are favourable, the company cheekily claimed, indicating that 59% of UK lager drinkers prefer the taste of the new brew over the current UK No.1 mainstream lager.

With climate change policies high up on many voter’s priorities, Carlsberg will also be reminding Brits as to how the brewer continues to ‘brew for a better tomorrow’ with the introduction of more sustainable packaging.

Last year, the brewer introduced the innovative new ‘Snap Pack’, pioneering technology that uses small glue dots to hold cans together rather than traditional plastic rings, a change that will see Carlsberg reduce its plastic usage globally by 76%.