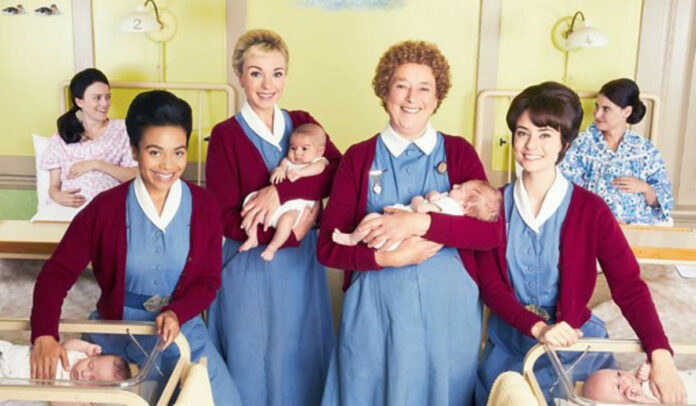 BBC One has confirmed that the ninth series of the hugely popular drama Call The Midwife will return to our screens next month.

Series creator and writer, Heidi Thomas, explains what lies in store for viewers:

“As the unfamiliar terrain of the Hebrides stretches the team to the utmost at Christmas, their return to Poplar sees them braving a landscape that feels suddenly unfamiliar.

Budgets are being cut, and hospitals reorganised. Terraced houses are being demolished, and traditional family structures torn apart.

There are wrecking balls everywhere, and it’s up to Sister Julienne, and the midwives and medics of Nonnatus House, to help find a way out of the rubble. When they themselves come under threat, their job becomes even harder.

As the series unfolds, and 1965 rolls by, we see the team dealing with cases involving cancer, diptheria, dementia, fistula, and homelessness.

They are faced with loneliness among the elderly, the traumas of an exhausted carer, and the defiant behaviour of a young and vulnerable prostitute.

They deliver more babies born out of wedlock, care for a couple whose beloved infant dies, and support a brave and beautiful new mother who is blind.

Meanwhile the Turner’s own family comes under threat, Lucille’s romance does not run smooth, and Sister Julienne is driven to take an extraordinary step.

In the interests of balance, I feel obliged to mention here that there is also a posse of visiting medical students, a fashion show in which Trixie wears the shortest miniskirt ever seen in Poplar, a Horticultural Extravaganza which tests Fred to the limit, and a firework display with a lot of toffee apples.

Life, in some ways, has never been sweeter. But time and again, we see our beloved regulars patching over the gaps in the system with ingenuity, kindness and – that eternal, priceless, beautiful thing – their care.

Love letter to the NHS

Call The Midwife has often been referred to as a “love letter to the NHS”, and – hand on heart – I cannot dispute that. But it is written in praise of many other things besides.

Yes, this is a drama that celebrates vaccination, antibiotics, life changing surgery, and gas and air in childbirth, all free at the point of delivery. It also flies the flag for various other miracles of the modern age, including tights, heated rollers and the electric Ladyshave.

But above all else, Call The Midwife is a love letter to kindness, tolerance, and courage. To vocation, community and hope.

There are times when the world seems so chaotic, and its problems so unwieldy, that it is easy to forget the power of small things. Throughout series nine, Call The Midwife’s tough, uncompromising, often angry stories are threaded through with little redemptive beats of kindness and generosity. Because these are the things that stitch the whole of life together.

One way and another, the new season of Call The Midwife contains quite a few pieces of advice. For example…

Vaccinate your children.
If you think you are in labour, don’t drink castor oil
And there is always someone, or something you can hold just a little bit closer. It might be a friend, or a relative, or a memory. It might be an institution, like the NHS.

Cherish it, even if it seems to make no difference in the scheme of things. As long as there is love involved, that is the thing that matters.”