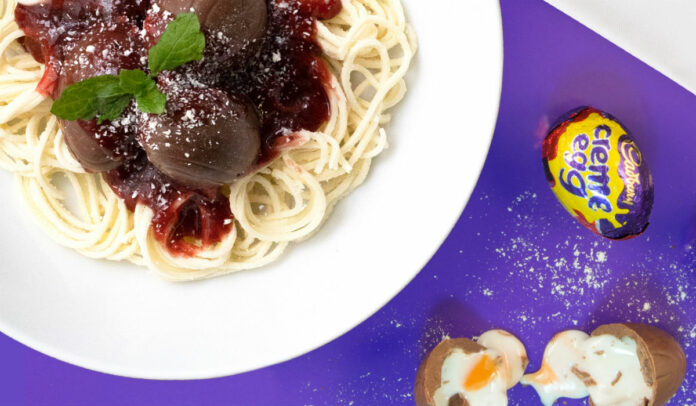 Cadbury Creme Egg has launched its EATertainment content hub in a cheeky campaign that will include a 24-hour livestream event.

The event is a nod to the rise of bingeworthy streaming content channels. It’s gonna include some pretty weird dishes, including Creme Egg spag and meatballs. Right, then!

The EATertainment content hub is a playful take on the ever-increasing number of streaming platforms. This includes established players like Netflix through to new entrants such as Disney Plus and Apple TV Plus.

Inspired by the infamous debate on the best way to enjoy a Creme Egg, the hub hosts a wide range of cinematic short films worthy of the big screen; a mindful-mess series and brain-gasmic ASMR episodes, that you can instantly stream anywhere on any device.

Tickets to the Cadbury Creme Egg EATertainment LIVE!, the world’s longest ever livestreamed food feast, airing on 23 January, are available to book via eventbrite.com.

It will give fans the opportunity of tucking into a weird and wonderful range of dishes any time of day or night whilst the stream is being broadcast.

The event will be hosted in the entertainment capital of the nation, Leicester Square. It offers the chance to star in a Creme Egg movie and appear in the longest ever live eating occasion.

Those that chow down in the most EATertaining way on those dishes – ranging from [a Creme Egg take on toad in the hole] to [a Creme Egg Spaghetti and Meatballs] – will stand the chance of winning a special award on Oscars-night.

Creme Egg is dishing out prizes to those who perform the best in the unusual film. It will include six separate categories such as most romantic chow and most action-packed munch.

“Through this launch and our real-life feast, we’re offering people the chance to be the star and show the world their own and ‘egg-centric’ ways of eating a Cadbury Creme Egg.”