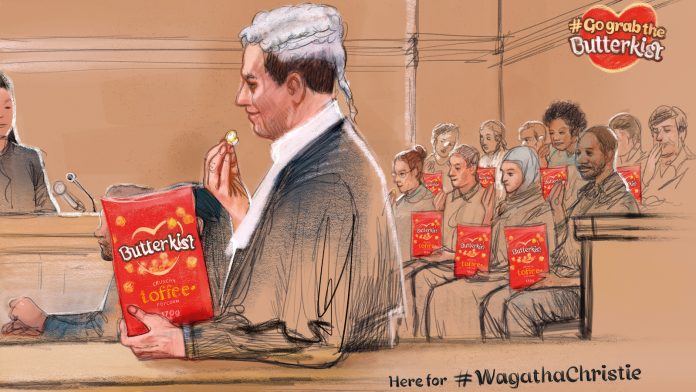 St Luke’s has once again taken the opportunity to highlight unmissable moments of drama – this time for the trial of the century, the #WagathaChristie courtroom drama.

As it is illegal under UK law to take photographs and video inside courts – news organisations often commission court sketches.

The surprise stars of the case are the artists who are relied on to create quickly drawn impressions of the various court scenes, these drawings have become the subject of intense debate on social media.

So Butterkist and St Luke’s have cheekily spoofed the courtroom sketches by reimagining the scene with all the captivated attendees munching on their popcorn as the drama unfolds, including the barrister as Rebekah Vardy gives evidence.

The tactical press ad, created by St Luke’s, which launches today (17 May) will appear in the print issue of The Metro newspaper and on Twitter where people following the trial will be encouraged to #GoGrabTheButterkist.

Ilan Arkin, Marketing Controller at Butterkist said: “At Butterkist, we’re here for the unmissable moments. We were there for #Partygate, and we’re here with the nation again, as they watch the drama unfold and #GoGrabTheButterkist for #WagathaChristie.

“Nothing beats grabbing a bag of popcorn when edge-of-the-seat drama unfolds in front of you. From cinema to sitting room – or following the courtroom drama of our times (besides the other one…) – Butterkist is the perfect snacking partner.”

Rich Denney, ECD at St. Luke’s said: “#WagathaChristie is all over the news creating a right courtroom drama.

“Not only that, the courtroom drawings themselves are causing as much entertainment as the case itself and that is the perfect opportunity for the nation’s favourite popcorn to pop up and join in the conversation. #GoGrabTheButterkist.”

The move follows Butterkist’s stunt outside Downing Street during “Partygate” in January, also created by St Luke’s, which saw the brand handing out packs of popcorn to passers-by, weary journalists and MPs at the gates of 10 Downing Street, as Sue Gray announced the findings of the inquiry into parties held at Number 10 during lockdown.