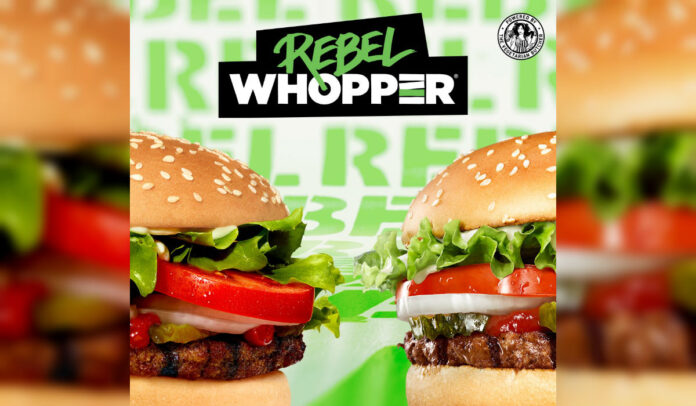 Burger King has been banned from advertising its Rebel Whopper veggie burger as vegan-friendly, because it contains egg and is cooked on the same grill as meat burgers.

The UK’s Advertising Standards Authority said it considered that consumers would understand the claims “100% WHOPPER. NO BEEF” and in particular the claim “plant-based burger” to mean that the burger did not contain any beef or animal products.

“We considered that the presence of the “Vegetarian Butcher” logo, the green colour palette and the timing of the ad and product release to coincide with ‘Veganuary’ contributed further to the impression that the product was suitable for vegans and vegetarians”, the standards body said.

“However, we understood that although the patty itself was plant-based, it was cooked on the same grill as meat products.

“We also understood that the complete burger contained egg-based mayonnaise.

“For those reasons the burger as-sold was not suitable for vegans or vegetarians.

“While we noted ad (b) featured the qualification that it was “cooked alongside meat products” we considered it was not sufficiently prominent to override the overall impression that the burger was suitable for vegetarians and vegans.

“We noted that some complainants had raised concerns about egg allergies.

“However we considered that those with egg allergies would not infer from the limited claims in the ads that the burger would be necessarily safe for them to eat.

“Because the overall impression of the ads was that the burger was suitable for vegans and vegetarians when in fact it was not, we concluded that the ads were misleading.

The ASA said the food giant must not the same ads again in their current form.

Absolutely right that Burger King was rapped on the knuckles for this, but we do love their burgers anyways.