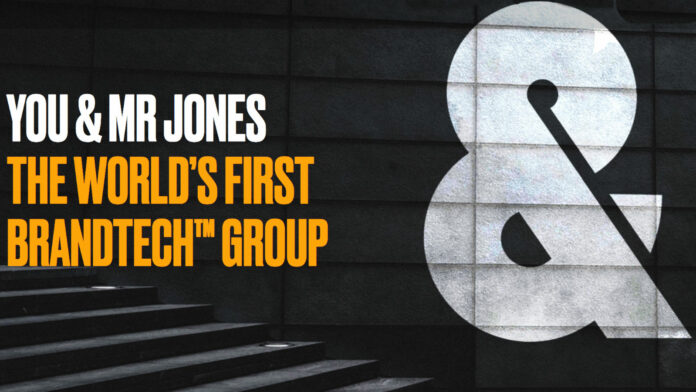 Following four years of exponential growth, You & Mr Jones, the world’s first Brandtech group, has raised an additional $200m to help leading global brands harness the power of technology to accelerate their growth and profitability.

This Series B round has the company valued at a $1.3 billion post-money valuation.

You & Mr Jones launched in June 2015 after raising an initial $350m from six investors to build an industry-disrupting Brandtech group that would help brands do their marketing better, faster and cheaper using technology.

The company has since seen impressive growth (CAGR 2015-2019 of +134.8%) on its way to becoming the global leader in providing enterprise level, technology-driven marketing solutions to the world’s biggest brands.

Since launching with only two founding employees in June 2015, the group now has 3,000 employees in 40 countries and in more than 50 cities and clients include Unilever, Adidas, Microsoft, Reebok, PayPal, Hertz, Marriott, LVMH, Renault-Nissan, Danone, Google and RB.

The group has made six acquisitions since launch (including the January 2019 acquisition of global in-housing pioneer and market leader, Oliver) and has made 34 investments in 21 tech companies – including a $20m investment in Pinterest and participation in every funding round for AR pioneers Niantic (creators of Pokémon GO and Harry Potter: Wizards Unite) since Niantic’s spin-off from Google in 2015.

The latest funding will be used to further accelerate You & Mr Jones’s global expansion with a focus on the APAC region, evolving the group’s technology platform, and expanding its three core verticals: inside operating systems, data & consultancy, and content (creation & distribution).

“We launched You & Mr Jones in 2015 based on the strong belief that due to the mobile revolution clients needed a totally new kind of marketing partner: one that was expert in both brand and technology”, said David Jones, founder and CEO, You & Mr Jones.

“Since then, we have seen a radical realignment of the marketing industry, with massive declines in the valuations of the established order as they have fundamentally failed to adapt, and the arrival of interesting new entrants – even including the head of the largest traditional legacy business who launched last year emulating our positioning.

“We are now moving to phase two of our journey. We’re strongly profitable, have no debt and a war chest of over $250m.

“Our focus is to further scale our ability to use technology to deliver better, faster and cheaper marketing for our clients and to capitalise on the huge opportunity that the market disruption affords us.”

Investors in this round include Baillie Gifford – which also invested in the Series A round – and which has major holdings in many of the world’s leading technology businesses including Amazon, Tencent, Alibaba, Tesla and Netflix.

James Anderson, Head of Global Equities, Baillie Gifford, says: “We are long-term believers in the power of technology and we invest in businesses that offer outsize opportunities. For those reasons, we are delighted to be reinvesting in You & Mr Jones.

“David and the team demonstrated an early understanding that the marketing industry was being fundamentally disrupted by technology and they have created a compelling proposition for the world’s leading brands.”

Ben Silberman, Co-founder and CEO, Pinterest said: “You & Mr Jones sit in a unique position at the intersection of the brand and tech worlds. They have been able to introduce us to leading global brands and help us better understand what brands need from technology platforms like Pinterest.”